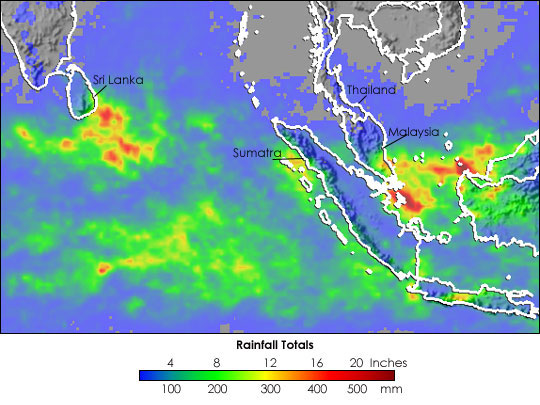 The cleanup and relief efforts from the recent tsunamis continue in coastal communities that were ravaged by the waves all across the Indian Ocean. Heavy rains have further complicated the matter and added to the misery in parts of eastern Sri Lanka. Between December 28, 2004, and January 5, 2005, up to 10 to 15 inches of rain may have fallen along the southeast coast of the island, and as much as 20 inches (red areas) fell just offshore. This rainfall map was created by the TRMM-based, near-real time Multi-satellite Precipitation Analysis (MPA) at the NASA Goddard Space Flight Center, which monitors rainfall over the global tropics. The map shows that many other regions around the Indian Ocean were also affected by the rains, including Malaysia and parts of Sumatra.

The heaviest rains fell on December 31 and January 4. The rains were likely the result of a combination of the northeast monsoon interacting with the topography and an active phase of what is known as the Madden-Julian Oscillation (MJO) (or 30-60 day oscillation). The MJO is a large-scale disturbance that propagates eastward from the Indian Ocean into the West Pacific Ocean, bringing extended periods of unsettled weather with it. Individual convective complexes within the MJO can last on the order of a day.