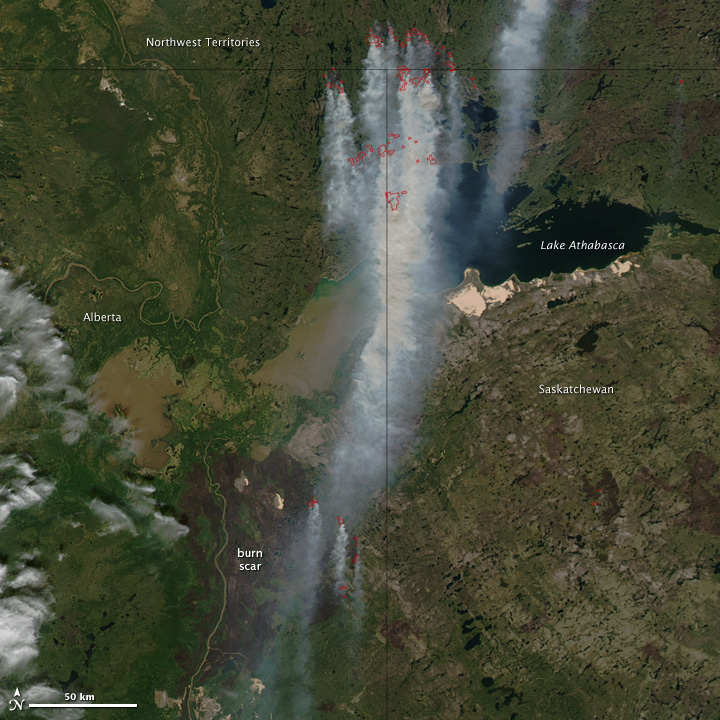 Hot, dry weather contributed to the growth of several wildfires near the borders of Alberta, Saskatchewan, and the Northwest Territories of Canada in late June 2011. This image, taken by the Moderate Resolution Imaging Spectroradiometer (MODIS) on the Aqua satellite on June 26, shows thick smoke streaming south from a cluster of wildfires, outlined in red.

In the south, a dark brown burn-scar defines the area burned in the Richardson Fire that started on May 15. On June 27, local officials reported that the Richardson Fire burned a staggering 613,360 hectares (1,515,646 acres or 2,368 square miles). The fire is part of the Bitumont Complex, which may include some of the fires burning along the east side of the burn scar.

So far in 2011, Canada has experienced fewer fires than average, but the fires have burned 277 percent more land than average. More than half of the 1,179,669 hectares burned in 2011 to date were consumed in the Richardson Fire.

Several large wildfires burn in Alberta, Saskatchewan, and Northern Territories, Canada in this image from June 26, 2011.