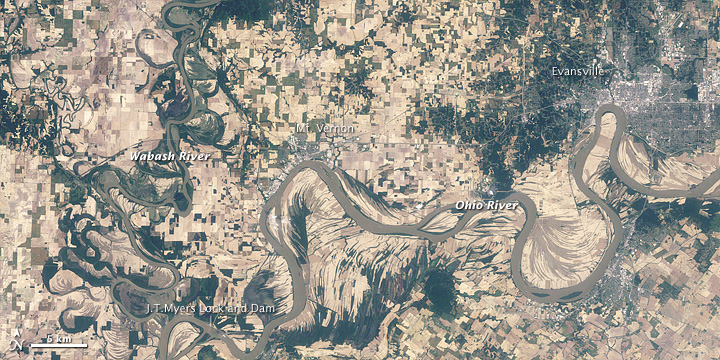 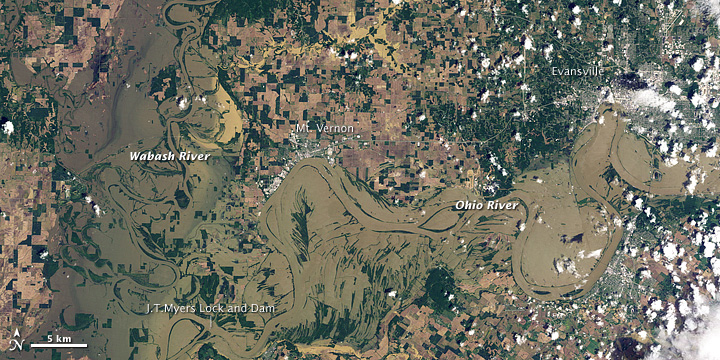 Rivers spilled over their banks at the confluence of the Wabash and Ohio in early May 2011. By early June, however, both rivers had receded. Although the Wabash and Ohio appeared to carry heavy sediment loads, water levels looked similar to those seen in April 2010.

The Thematic Mapper on the Landsat 5 satellite captured these natural-color images on June 4, 2011 (top), and May 3, 2011 (bottom). Flood water fills the scene from early May, but the land appears to have largely dried out by early June.

Although water levels have receded below flood stage, some changes to the landscape remain apparent in early June 2011. Mud deposited by the Ohio River lingers south of Evansville—curving tendrils of dark brown inside a big southward loop of the river. West of that loop, mud appears to have buried vegetation on an island in the river. Mud from the Wabash River appears north of J.T. Myers Lock and Dam.

On June 7, 2011, the Advanced Hydrological Prediction Service of the U.S. National Weather Service reported that river levels at Evansville, Mt. Vernon, J.T. Myers Lock and Dam, and most of the other communities in the vicinity were below flood stage. 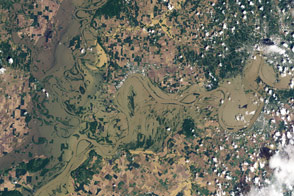 Flooding along the Wabash and Ohio Rivers