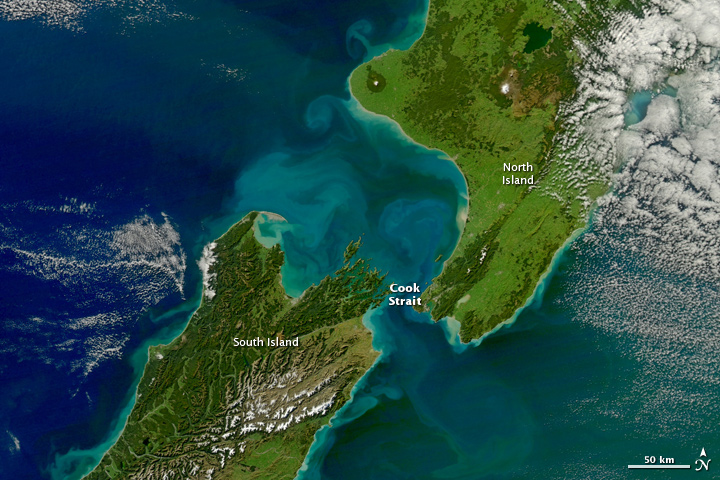 Runoff from heavy rains, combined with wave action along the coast, increased the turbidity of New Zealand’s waters when this image was acquired on April 29, 2011. The Moderate Resolution Imaging Spectroradiometer (MODIS) on NASA’s Aqua satellite captured this view of sediment flowing in the Pacific Ocean.

The volume of sediment in the water hints at rough seas. Distinctive plumes arise from pulsing rivers, while the halo of turquoise around both islands is likely sediment swept up to the ocean surface by powerful waves. The plumes fan out and fade from tan to green and blue with water depth and distance from the shore.

Cook Strait, the narrow strip of water separating the North and South Islands of New Zealand, has a reputation for being among the world’s roughest stretches of water. The islands lie within the “Roaring Forties,” a belt of winds that circles the globe around 40 degrees south. The westerlies hit the islands side on and run into the mountain ranges. Cook Strait is the only opening for the winds, so the channel becomes something of a wind tunnel. Strong winds produce high waves, and they erode the shore as shown in the image.

However, sediment may not be causing all of the color. The waters around New Zealand are rich in nutrients, so it is likely that phytoplankton are contributing to some of the fanciful swirls in the image. Mixing currents bring nutrients to the ocean’s surface, providing a prime environment for plankton blooms. Made up of millions of tiny plant-like organisms, the blooms routinely color the ocean with broad strokes of green and blue.

Phytoplankton are important to New Zealand because the organisms are the base of the ocean food chain. In places where phytoplankton flourish, fish also gather. Commercial fishing is New Zealand’s fourth largest industry.

Sediment and phytoplankton create bright swirls of color in this image of New Zealand taken on April 29, 2011.

A large phytoplankton bloom colors the water around the Chatham Islands, New Zealand, in an array of green and blue in this image from December 5, 2010.