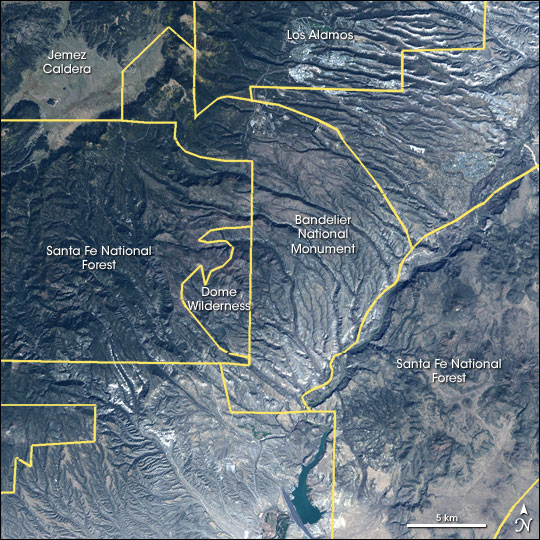 Bandelier National Monument rises from the Rio Grande up the slopes of the Jemez Mountains in central New Mexico. Proclaimed by President Woodrow Wilson in 1916, the park takes in almost 33,000 acres of land that include a large number of Pueblo dwellings occupied between the 1100s and the mid-1500s. The area was home to human settlements for thousands of years prior to the Pueblo civilizations’ presence. The monument, named for Adolph Bandelier, a 19th-century anthropologist, was created both to protect these ancient dwellings and to make their beauty, their story, and their location open to the general public.

In this image, boundaries of some of the federal, state, and local lands are outlined in yellow. Bandelier is roughly in the center of the image. The monument stretches from its highest points in the Jemez Caldera at the upper left corner, southward across numerous canyons and arroyos into the White Rock Canyon, where the Rio Grande runs.

Along the northern boundary of the park runs the canyon created by Frijoles Creek, where some of the most spectacular ruins exist, as it erodes through volcanic rock laid down by eruptions of Valle Grande Peak; Jemez Caldera, the former volcanic summit of Valle Grande, is one of the world’s largest calderas. The rock is full of natural cavities that the Anasazi fashioned into cliffside dwellings.

Most of monument is wilderness area, meaning there is no road access to the area and there are restrictions on power equipment (fallen trees cannot be cut off hiking trails with chain saws, for example), making them places of great scenic beauty and quiet serenity. There are a number of hot springs, hints that volcanism in the area is not completely extinct.

Congress added the 5,200-acre Dome Wilderness Area in 1980, protecting Saint Peters Dome. Southern views from the dome take in the Cochiti Lake, pictured near the bottom center of the image. The lake is a part of flood and sediment control on the Rio Grande, held back by a 251-foot-high earthfill dam (gray-blue sliver at bottom center), one of the largest in the United States. The 1,200-acre lake, however, exceeds what would be needed just for flood control. The lake was created by Congress at the behest of the state and local governments by diverting water from the Colorado River Basin via the San Juan-Charma Diversion Project. The project channels water topographically destined for the Pacific Ocean down into central New Mexico and the Rio Grande through 26 miles of tunnels under the mountains of the Continental Divide.

Also visible in this satellite image is the science research town of Los Alamos immediately north of the monument. Most famous for its role in the making of the first atomic weapons, Los Alamos continues to be a major center for science research and computer modeling of complex systems.

This natural-color image was created from data collected by Landsat 7’s Enhanced Thematic Mapper Plus (ETM+) instrument on October 14, 1999.