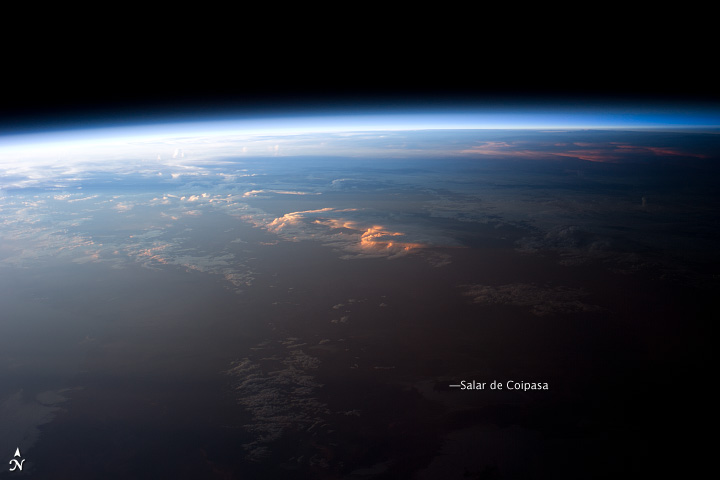 Astronauts onboard the International Space Station see, on average, 16 sunrises and sunsets during a 24-hour orbital period. Each changeover between day and night is marked by the terminator, a line on Earth's surface separating the sunlit side from the darkness.

While the terminator is often conceptualized as a hard boundary—and is frequently presented as such in graphics and visualizations—in reality the edge of light and dark is diffuse due to the scattering of light by the Earth’s atmosphere. This zone of diffuse lighting is experienced as dusk or twilight on the ground; while the Sun is no longer visible, some illumination is still present due to light scattering over the local horizon.

The terminator is visible in this panoramic view across central South America, looking towards the northeast. An astronaut shot the photo at approximately 7:37 p.m. local time. Layers of the Earth’s atmosphere, colored bright white to deep blue, are visible on the horizon (or limb). The highest cloud tops have a reddish glow due to direct light from the setting Sun, while lower clouds are in twilight.

The Salar de Coipasa, a large salt lake in Bolivia, is dimly visible on the night side of the terminator. The salar provides a geographic reference point for determining the location and viewing orientation of the image.

Astronaut photograph ISS027-E-12224 was acquired on April 12, 2011, with a Nikon D3S digital camera using a 50 mm lens, and is provided by the ISS Crew Earth Observations experiment and Image Science & Analysis Laboratory, Johnson Space Center. The image was taken by the Expedition 27 crew. The image has been cropped and enhanced to improve contrast. Lens artifacts have been removed. The International Space Station Program supports the laboratory as part of the ISS National Lab to help astronauts take pictures of Earth that will be of the greatest value to scientists and the public, and to make those images freely available on the Internet. Additional images taken by astronauts and cosmonauts can be viewed at the NASA/JSC Gateway to Astronaut Photography of Earth. Caption by William L. Stefanov, NASA-JSC.

The changeover between day and night is marked by the terminator, a line on Earth's surface separating the sunlit side from the darkness.