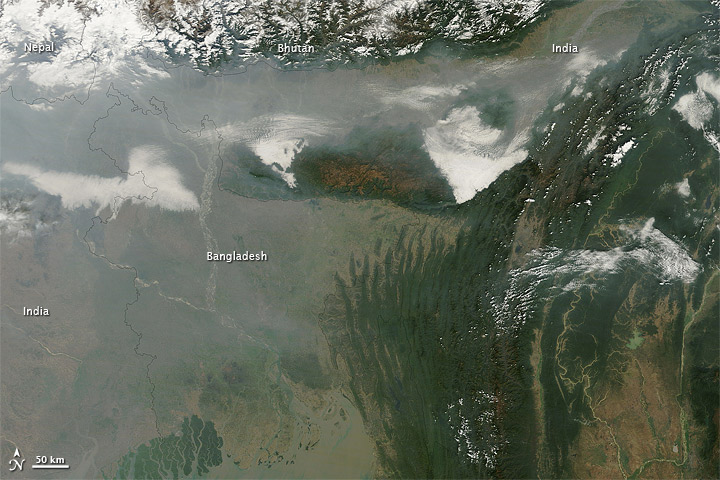 Haze hovered over parts of India and Bangladesh on January 20, 2011. The Moderate Resolution Imaging Spectroradiometer (MODIS) on NASA’s Terra satellite took this picture the same day. A broad band of thick haze and clouds extends across the northeastern tip of India. Though not as thick, more haze stretches from central India eastward into Bangladesh.

The haze likely results from pollution, and a temperature inversion probably holds it in place. Air high in the atmosphere is usually cooler than the air closer to the surface. As warm air rises in the atmosphere, it disperses its pollutants. During the winter, however, cold air often slides down the southern face of the Himalayas, getting trapped under a layer of warmer air. As long as the cold air stays below the warm air, the inversion holds the pollutants in place.

The International Federation of Red Cross and Red Crescent Societies (FRC) reported that tropical Bangladesh was suffering from a cold wave in January 2011. The unusually low temperatures affected agriculture and fisheries, and may have allowed pollutants in the region to accumulate. 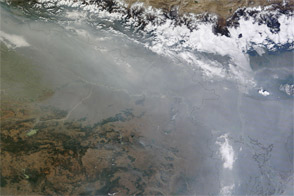 Acquired in early December 2011, this natural-color image shows haze along the southern slopes of the Himalaya, continuing a weeks-long pattern.