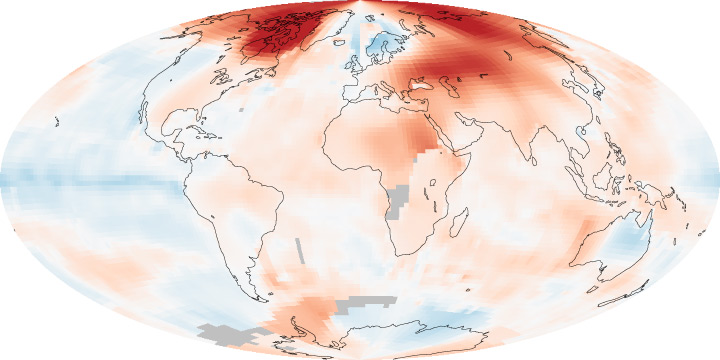 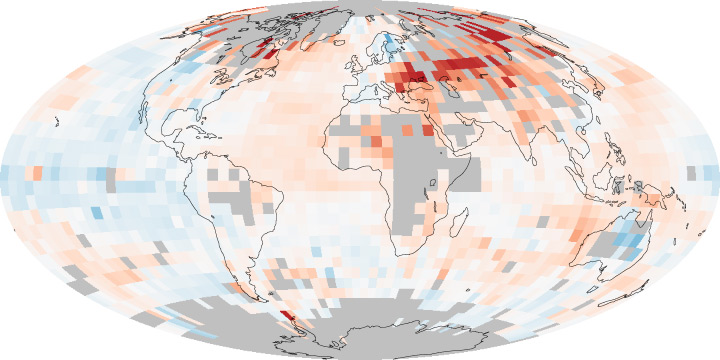 Each year, scientists from several major institutions—NASA’s Goddard Institute for Space Studies (GISS), NOAA’s National Climatic Data Center (NCDC), the Japanese Meteorological Agency, and the Met Office Hadley Centre in the United Kingdom—tally the temperature data collected at stations around the world and make independent judgments about whether the year was warm or cool compared to previous years.

On January 12, 2011, the NASA group announced that 2010 had tied 2005 as the warmest year in their 131-year instrumental record. NOAA also declared 2010 to be tied with 2005. The Japanese Meteorological Agency noted in a preliminary analysis that 2010 was the second warmest. The Met Office Hadley Centre has yet to make its announcement.

What matters more than a yearly record from a single group is the longer trend, as shown in the plot at the top of this page. The four records are unequivocal: the world has warmed since 1880, and the last decade has been the warmest on record.

When we focus on the annual rankings, the differences between the temperature analyses can be confusing. For example, GISS previously ranked 2005 as the warmest, while the Met Office listed 1998. The discrepancy helped fuel a misconception that findings from the research groups varied sharply or contained large degrees of uncertainty. It also fueled a misconception that global warming had stopped in 1998.

“The official records vary slightly because of subtle differences in the way we analyze the data,” said Reto Ruedy, one of Hansen’s colleagues at GISS. “But they also agree extraordinarily well.”

All four records above show peaks and valleys in sync with each other. All show particularly rapid warming in the past few decades. And all show the last decade as the warmest.

The small discrepancies between the records are mostly due to the way scientists from each institution handle regions of the world where temperature-monitoring stations are scarce—parts of Africa, Antarctica, the Arctic, and the Amazon. For instance, GISS fills in the gaps (see the first global map above) with data from the nearest land stations. The Met Office analysis (second of the two global maps above) leaves areas of the Arctic Ocean out.

Both approaches pose problems. By not inferring data, the Met Office assumes that the areas without stations have a warming equal to that of the entire Northern Hemisphere—a value that satellite and field measurements suggest is too low, given the observed rate of Arctic sea ice loss. On the other hand, GISS’s approach may either overestimate or underestimate Arctic warming.

“There’s no doubt that estimates of Arctic warming are uncertain, and should be regarded with caution,” Hansen said. “Still, the rapid pace of Arctic ice retreat leaves little question that temperatures in the region are rising fast, perhaps faster than we assume in our analysis.”

The temperature records also differ slightly because the point of reference that each group uses to calculate global temperature is different. It is not possible to reliably calculate absolute global average surface temperatures, so scientists instead calculate a relative measure called a “temperature anomaly.” They compare average temperatures at any given time and place to a long-term average, or base period, for each area. GISS uses a base period of 1951 to 1980; the Met Office uses 1961 to 1990; the Japanese Meteorological Agency uses 1971 to 2000; and NCDC uses the entire 20th century. The graph at the top of this page shows the four surface temperature records aligned to a common baseline: the average global temperature from 1951–1980.

This means that numerical values of the temperature anomalies differ. But it does not change the magnitude of temperature changes over the past century.