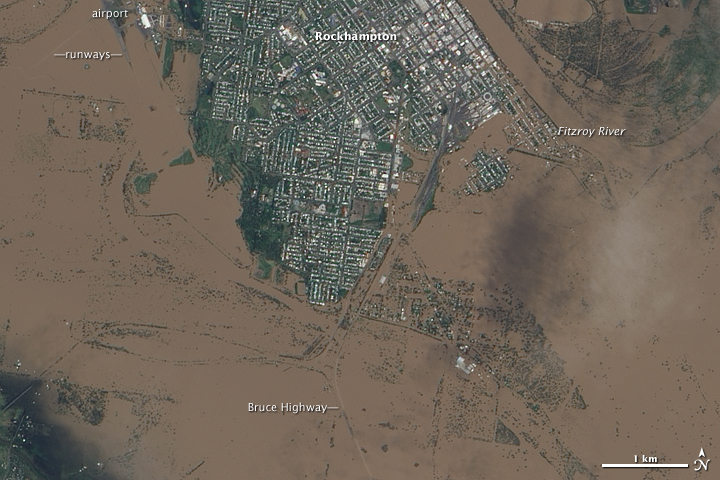 The airport, the Bruce Highway, and large swaths of Rockhampton, Australia, remained under water on January 9, 2011. Days of rain pushed the Fitzroy River over its banks, inundating parts of the city near the Queensland coast. Damage to the Bruce Highway was not confined to Rockhampton, as ABC News Australia reported other parts of the highway were expected to remain under water for some time.

In this image, acquired by the Advanced Land Imager (ALI) on NASA’s Earth Observing-1 (EO-1) satellite on January 9, 2011, isolated islands of cityscape poke through murky brown flood waters. The Fitzroy River cuts through the upper right quadrant of the image and, just west of the river, relatively high land remains above the flood.

Rockhampton was just one of many Australian communities reeling from floods. Farmers along the Sunshine Coast were stranded by high waters that washed out roads. Authorities in Brisbane, Australia’s third-largest city, told residents to evacuate in anticipation of the worst flooding in several decades.