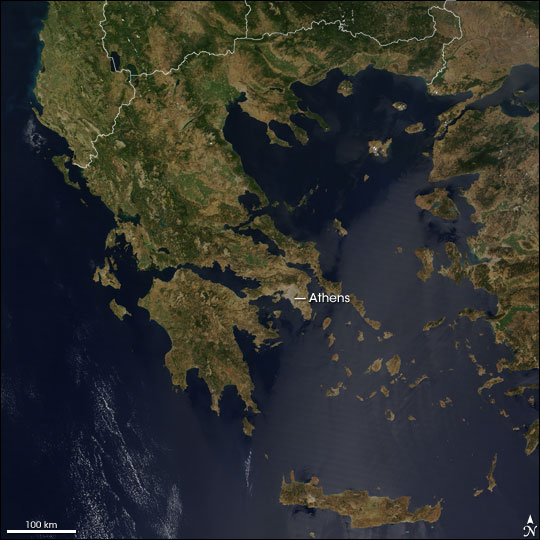 Forming the southern tip of the Balkan Peninsula, Greece is made up of a series of mountains that run into the sea, extending into scattered islands through the Aegean Sea in the east. The texture of mountain and valley makes the country appear marbled in tan and green in this true-color image, captured by the Moderate Resolution Imaging Spectroradiometer (MODIS) on NASA’s Terra satellite on August 19, 2004. The bright green areas in the center and right side of the peninsula are likely agricultural areas. The green is lighter in tone than the native dark vegetation that grows in ragged lines along the mountain ranges. The grey and tan pock marks within the agricultural areas are small cities. Greece’s largest city and capital, Athens, forms a large grey smudge on the southern tip of the mainland peninsula.

Modern-day Greece is a nation of many islands, but in ancient times, Greece was a loose confederation of city-states that usually only came together as a whole to defend themselves from invaders. With easy access to the Mediterranean Sea to the south and the Aegean Sea to the north and northeast, Athens was among the most powerful of the city states.

More recently, Athens has again become the center of the world’s attention as the Olympic Games returned to their modern birthplace in August 2004. The ancient Games began in 776 BCE in the city of Olympia on the northwest side of Peloponnesus, the large island immediately below the mainland, just west of Athens. About 2,700 years later, in 1896, the Olympics were reborn in Athens. The 2004 Olympics mark the twenty-eighth modern Olympiad.

On August 19, skies were clear over Greece and the Balkan States to its north. MODIS detected several fires burning primarily in Bulgaria, Greece’s northeastern neighbor. The fires have are faintly outlined in red. The high-resolution image provided above has a resolution of 250 meters per pixel. It is available in additional resolutions.

Smoke Over the Aegean Sea

Fires on the Balkan Peninsula

Scores of large fires dotted the Balkan Peninsula on July 25, 2007, when the Moderate Resolution Imaging Spectroradiometer captured this photo-like image.