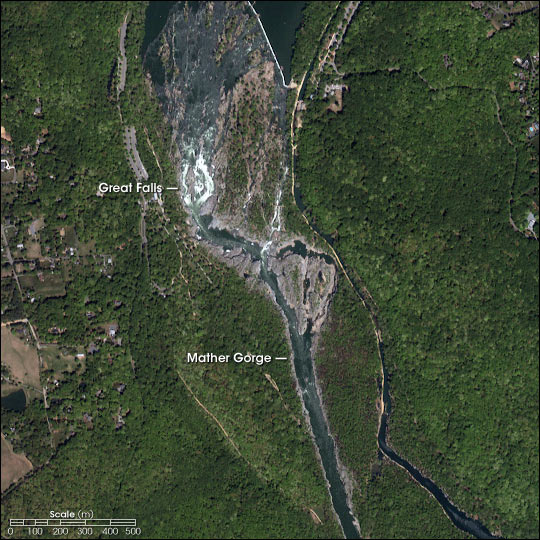 According to a new study conducted by geologists at the University of Vermont, it was roughly 35,000 years ago that the Potomac River first began carving out the Great Falls of the Potomac. By analyzing a rare isotope formed by cosmic rays colliding with rocks and sediments on Earth’s surface, researchers were able to gauge when and how quickly the Potomac River abandoned its ancient bed and cut through bedrock to form the terraces where people climb and hike today. (This study was published in the July 23 issue of Science. Click to read the press release.)

Situated about 24 km (15 miles) west of Washington, D.C., Great Falls is a 3-square-kilometer (800-acre) park providing scenic views to hundreds of thousands of visitors every year. The site is particularly popular among hikers, climbers, and kayakers.

The waters of the Potomac gather speed as they are forced through the narrow Mather Gorge and cascade over a series of several 6-meter (20-foot) falls. In all, the water falls a total of 23 meters (76 feet) in elevation over a distance of less than a mile. According to the National Park Service Web site, the Great Falls of the Potomac are the steepest and most spectacular fall line rapids of any river in the eastern United States.