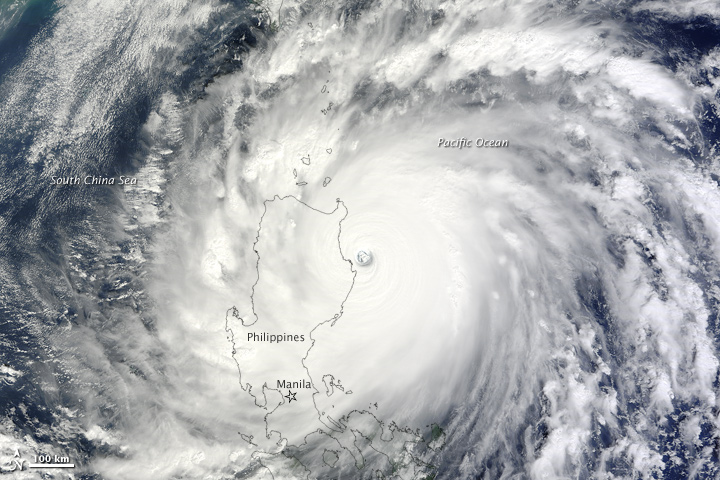 On October 18, 2010, Typhoon Megi approached and made landfall in the northeastern Isabela Province of the Philippines. Spanning more than 600 kilometers (370 miles) across, Megi was the 15th tropical storm and 7th typhoon of the season in the western Pacific Ocean. It was the most intense tropical cyclone of the year to date.

This image was taken by the Moderate Resolution Imaging Spectroradiometer (MODIS) on NASA’s Terra satellite at 10:35 a.m. Philippine Time (02:35 UTC) on October 18, 2010. Megi was bearing down on Palanan Bay as a “super typhoon” with category 5 strength on the Saffir Simpson scale. As of 8:00 a.m. local time, the storm had sustained winds of 268 kilometers (167 miles) per hour, according to the Joint Typhoon Warning Center.

The storm had grown to “super” typhoon status on October 16, and wind speeds peaked at an estimated 287 kilometers (178 miles) per hour while the storm was still over the Pacific Ocean on October 17. Megi began to downgrade as it moved onshore around 11:30 a.m. on October 18 and then crossed over the Sierra Madre mountain range (average elevation 1,800 meters, or 5,900 feet).

News reports indicated at least one death and an unknown number of injuries, as power and communications was cut off to more than 90 percent of Isabela and Cagayan provinces. In addition to the immediate damage, officials were concerned about the long-term damage to the rice crop, a staple of the national diet.

The official international name of the storm is Megi, which means “catfish” in Korean. But the storm is known locally as Juan, as the Philippine Atmospheric, Geophysical and Astronomical Services Administration has its own naming system.

Forecasters were predicting that the storm would continue moving west and north, entering the South China Sea and re-intensifying before a potential landfall in China or Vietnam later this week. China’s National Meteorological Centre urged local governments to make preparations for extreme weather.