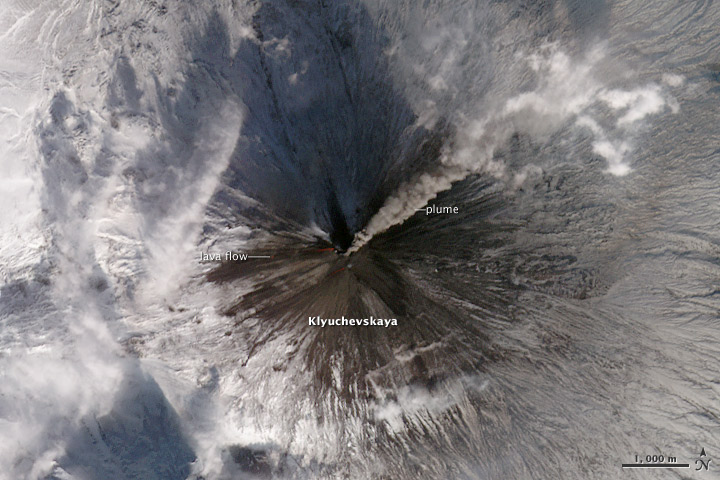 Klyuchevskaya Volcano (also spelled Kliuchevskoi), on the Kamchatka Peninsula in Russia’s far east, continues its frequent but relatively mild volcanic activity. This false-color satellite image shows not only a volcanic plume, but also active lava flows descending the volcano’s western flanks. The flows are hot enough to glow in near-infrared light, so they appear red in the image, which displays near-infrared, red, and green wavelengths as red, green, and blue respectively. (Note that in the enlarged image, vegetation also appears red because it reflects near-infrared light strongly and absorbs most red and green light.) The ash-rich plume is gray, as are the ash-covered slopes near the summit. Snow and clouds are white.

This image was acquired on October 11, 2010, at 12:37 p.m. local time by the Advanced Spaceborne Thermal Emission and Reflection Radiometer (ASTER) aboard Terra. Several hours later, the Tokyo Volcanic Ash Advisory Center reported that ash from Klyuchevkskaya had risen to an altitude of 33,000 feet (10,000 meters).

Klyuchevskaya is one of four volcanoes currently erupting on Kamchatka. A wider view of the same satellite image shows two of them: Bezymianny just to the south, and Shiveluch 77 kilometers (48 miles) to the north-northeast.

Klyuchevskaya is one of the world’s most active volcanoes. 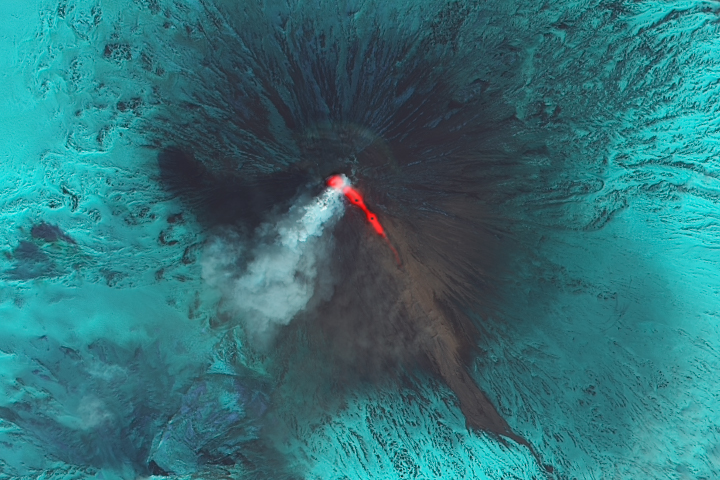 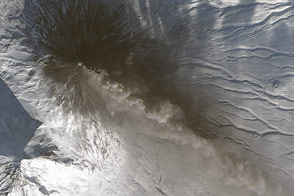 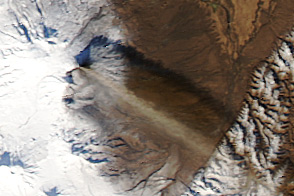 A translucent volcanic plume from Klyuchevskaya Volcano stretched over the snow-covered Kamchatka Peninsula on April 7, 2010.