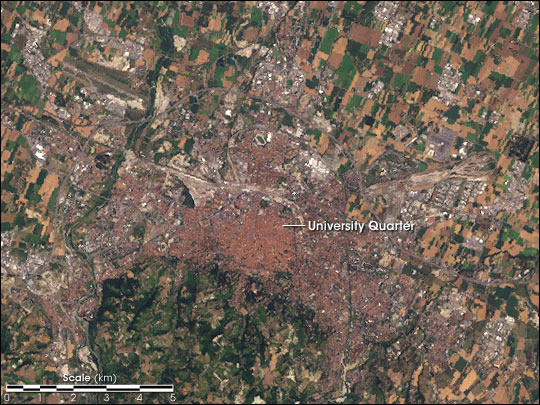 Jean-Dominique Cassini (born Giovanni Cassini) a leading astronmer, mathematician, and engineer, began his scientific career at the Panzano Observatory in Bologna, Italy, in the middle of the 17th century. The current NASA mission to Saturn was named after Cassini in honor of his observations of the ringed planet.

Located in north-central Italy on the southern edge of the Emilia-Romagna plains and the northern limit of the Apennine Mountains, the city of Bologna has been the site of human settlement for at least 3,000 years. Over this time, a succession of civilizations ruled the city: Villanovians, Etruscans, Galli Boi, Celts, Romans, and Christian Popes. In 1859 the city joined the nation of Italy. The University of Bologna (where Cassini was a professor of mathematics from 1650-68) was founded in 1088.

It was Cassini who discovered the large gap in Saturn’s rings (through which the Cassini spacecraft flew on June 30, 2004, as it entered into orbit) and four of Saturn’s moons: Iapetus, Rhea, Tethy, and Dione. He also correctly theorized that the rings were composed of small particles orbiting Saturn.

Cassini’s other accomplisments in astronomy included measuring the period of rotation in Mars and Jupiter, analyzing the orbits of Jupiter’s moons, and mapping features on the surface of the moon.

This image was acquired on June 20, 2000 by the Enhanced Thematic Mapper plus on board the Landsat 7 satellite.