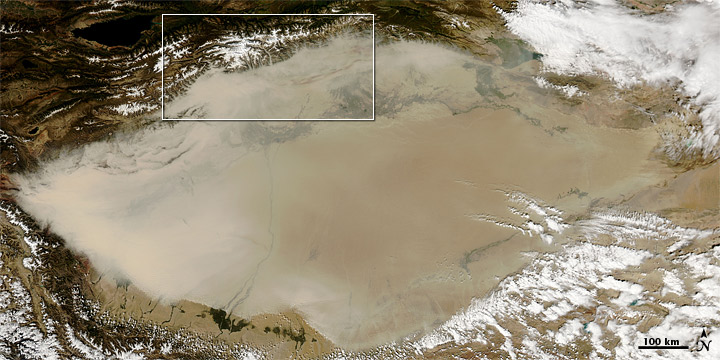 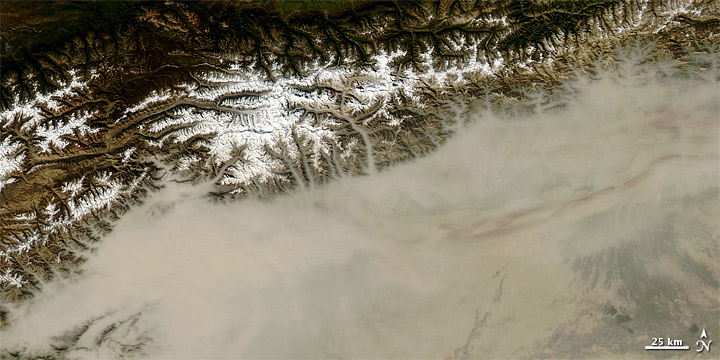 Thick dust clogged the air over China's Taklimakan Desert in early September 2010. The dust was especially thick along the western perimeter of the desert. Toward the desert’s eastern end, the dust thinned.

The Moderate Resolution Imaging Spectroradiometer (MODIS) on NASA’s Aqua satellite observed the dust storm on September 5, 2010. These natural-color images show a wide-area view (top) and a close-up view (bottom). The close-up shows dust remaining close to the ground, confined to well-defined valleys snaking into the Taklimakan from the north.

Resting in the Tarim Basin between the Tien Shan Mountains to the north and Kunlun Mountains to the south, the Taklimakan is the largest desert in China, and the largest shifting-sand desert in the world. Eighty-five percent of the Taklimakan’s surface consists of crescent-shaped dunes, some reaching a height of 200 meters (650 feet). Lacking drainage, the desert has collected large quantities of salt left behind by evaporating water.