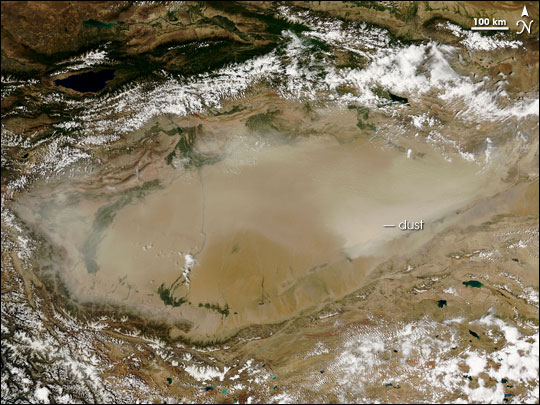 A dust storm struck the Taklimakan Desert in western China on July 26, 2006. The Moderate Resolution Imaging Spectroradiometer (MODIS) flying onboard NASA’s Aqua satellite took this picture the same day. The dust covers most of the desert, with a strong concentration near the eastern edge.

The Taklimakan Desert occupies the Tarim Basin, located between the Tianshan Mountains in the north and the Kunlun Mountains in the south. The Taklimakan is the world’s second-largest shifting-sand desert, and geologists had long wondered about its age. Several weeks before this dust storm struck, Science published a report indicating that shifting sand dunes dominated the desert by at least 5.3 million years ago. Dust and sand collected in the desert as winds could no longer blow accumulating silt out of the basin.

Dust Storm over the Taklimakan Desert

On May 10, 2007, a dust storm covered most of the Taklimakan Desert in western China. The Moderate Resolution Imaging Spectroradiometer (MODIS) on NASA’s Terra satellite captured an image of the storm at 05:50 UTC. The storm had intensified by the time the MODIS sensor on NASA’s Aqua satellite took another picture at 07:30 UTC.