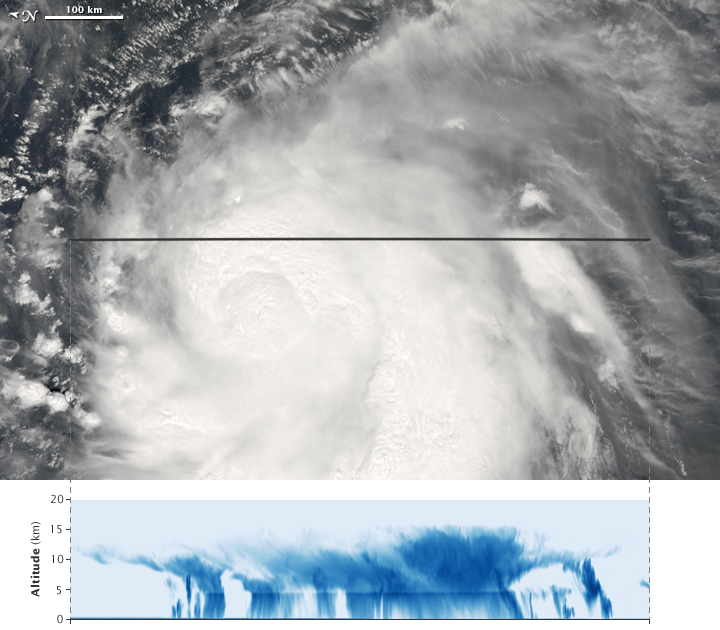 Hurricane Earl was gaining strength on August 29, 2010. At 2:00 p.m. Atlantic Standard Time (AST) that day, the U.S. National Hurricane center reported that Earl was located roughly 190 miles (310 kilometers) east of Antigua, and roughly 280 miles (450 kilometers) east of St. Martin. The storm had maximum sustained winds of 75 miles (120 kilometers) per hour, and was heading toward the west-northwest.

This image pair shows a natural-color view of Hurricane Earl captured by the Moderate Resolution Imaging Spectroradiometer (MODIS) on NASA’s Aqua satellite (top) combined with a profile of the vertical structure of the clouds measured by the radar on the Cloudsat satellite (bottom). The images were acquired around 2:25 p.m. AST (17:25 UTC) on August 29, 2010.

The Aqua image has been rotated so that north is to the left. The black line shows the track that Cloudsat followed as it passed over the storm a few minutes after Aqua. The radar reflectivity measured by Cloudsat is the echo from the pulse of energy the radar sends out bouncing back from the ocean surface or from cloud particles in the atmosphere. If you could cut a north-south line through the hurricane, clear away half, and look at the storm from the side, the cloud heights would roughly mimic this profile.