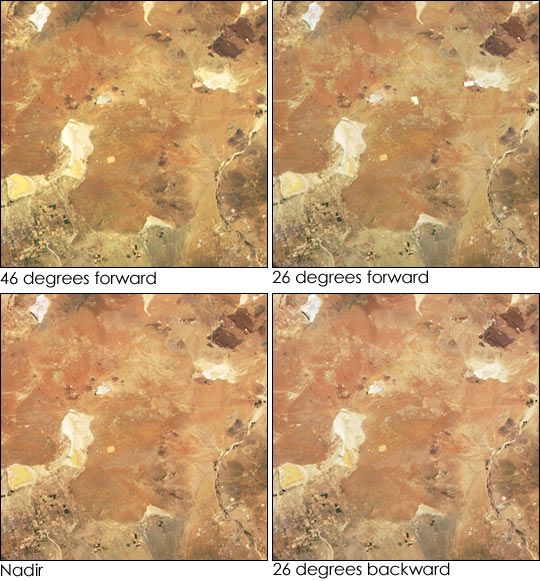 Depending upon the position of the Sun, the solar power stations in California’s Mohave Desert can reflect solar energy from their large, mirror-like surfaces directly toward one of the Multi-angle Imaging SpectroRadiometer (MISR) cameras, and appear dramatically brighter at some observation angles than at others. The solar power fields are readily discernible in this set of natural-color images as the Sun’s rays are reflected differently from the solar power fields at different observation angles.

These four images were acquired on April 8, 2003, when the MISR camera closest to the specular reflection angle (the angle at which a perfect mirror reflects light) was the 26° forward-pointing camera. The solar fields can be readily identified by comparing the 26° forward camera view (top right-hand panel) with the other camera views, and also by using the animation (540 KB), which covers the same geographic area but uses data acquired on 24 October 2000, when both the 60° and 46° forward cameras pointed close to the specular reflection angle. Since MISR’s forward-viewing cameras point toward the Sun in the northern hemisphere, and because these parabolic reflectors move to track the Sun, only the forward-pointing cameras sometimes observe these solar fields near the specular reflection angle.

The two Solar Electric Generating Systems (SEGS) that appear alternately dim and very bright are the 150 megawatt array at Kramer Junction (slightly above image center) and the 160 megawatt array at Harper Lake (upper right-hand corner). The Mohave Desert SEGS are the largest collection of solar fields in the world. Together they cover an area of about 2000 acres and have a combined electrical capacity of 354 megawatts. The types of solar-concentrator systems used in the Mohave track the Sun with parabolic reflectors and use either oil-filled tubes or tall receiving towers to convert solar energy into heat. The plants were built during the 1980s and are still in commercial operation.

The Multi-angle Imaging SpectroRadiometer observes the daylit Earth continuously and every 9 days views the entire globe between 82 degrees north and 82 degrees south latitude. These data products were generated from a portion of the imagery acquired during Terra orbit 17583, and the animation comes from orbit 4535. The large images (provided above) cover an area of about 93 kilometers x 100 kilometers and utilize data from blocks 62 to 63 within World Reference System-2 path 41.