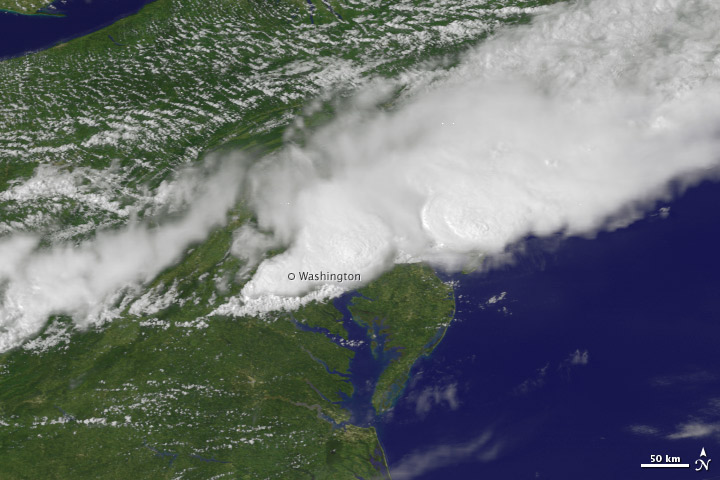 One of the most destructive storms in years struck Washington, D.C., and the surrounding area on July 25, 2010. Strong winds downed trees and power lines, leaving hundreds of thousands of residents without power, stopping elevators, and darkening malls and movie theaters. Falling trees killed at least two people. The following morning, crews were working furiously to restore power to homes, traffic lights, and even a water treatment plant.

The Geostationary Operational Environmental Satellite (GOES)—built and launched by NASA, and operated by the National Oceanic and Atmospheric Administration (NOAA)—captured a series of images of the storm activity on July 25, 2010. This image is a composite of clouds from GOES merged with background data of the land surface from NASA’s Moderate Resolution Imaging Spectroradiometer (MODIS). The animation shows a series of thunderstorms coalescing as the fast-moving front travels from the Appalachians toward the Mid-Atlantic. By 4:15 p.m. Eastern Daylight Savings Time, the strongest thunderstorms were directly over Washington, D.C.

The violent storms followed on the heels of relentless heat for the U.S. East Coast. “The East Coast has been baking for weeks,” explains George Huffman, a research meteorologist at NASA’s Goddard Space Flight Center. “It’s been hot and muggy, with lots of moisture in the air, and that stuff has been trapped under a high-pressure system. Storms had been steering around the edges of that system. In fact, the flight that experienced so much turbulence last week was along the edge of that high pressure.”

Forecasts had raised the possibility of severe weather for the East Coast on July 25, and Huffman watched the storm system as it traveled over Ohio and Pennsylvania, remaining intact as it moved. “You tend not to see well-organized lines of thunderstorms at 9:00 a.m.,” he says. But the storm system coming from the west did not dissipate, even in the mid-morning hours. “The large-scale pattern shifted, allowing the high pressure to our northwest, which is cooler and drier, to push toward the southeast. That push was strong enough to organize the squall lines that fed off of our hot, muggy conditions,” he explains. “As storms come across the mountains toward the coastal plain, they have three options: hang together, get stronger, or get weaker. This storm system got stronger.”