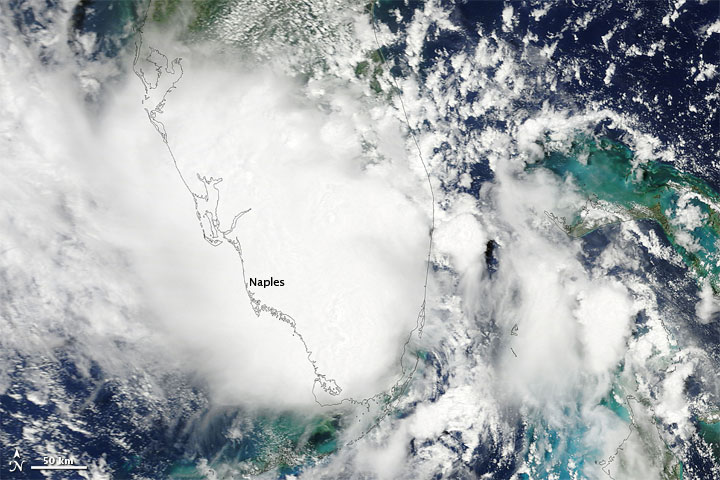 At 6:15 p.m. Eastern Daylight Time on July 22, 2010, the U.S. National Hurricane Center (NHC) reported that Tropical Depression Three had strengthened into Tropical Storm Bonnie east-southeast of Florida. At 2:00 p.m. EDT on July 23, 2010, the NHC reported that Bonnie had become less organized after passing over Florida, but was moving toward the west-northwest at about 18 miles (30 kilometers) per hour, with maximum sustained winds of 40 miles (65 kilometers) per hour. The NHC reported that the storm center was roughly 55 miles (90 kilometers) east-southeast of Naples, Florida.

The Moderate Resolution Imaging Spectroradiometer (MODIS) on NASA’s Terra satellite captured this natural-color image of Bonnie at 11:35 a.m. EDT on July 23, 2010. Although the storm lacks a discernible eye, it appears as a solid cloud mass that spans southern Florida.

The July 23 bulletin from the NHC stated that Bonnie was expected to travel over the eastern Gulf of Mexico late July 23, and July 24. A tropical storm warning was in effect for the Florida west coast from East Cape Sable north to Englewood, and for Destin, Florida, to Morgan City, Louisiana, including Lake Pontchartrain. The Deepwater Horizon Response site reported that the Florida Peninsula Command Post had initiated severe weather response plans in relation to the storm, and had ordered personnel to seek shelter. (Images related to the Gulf oil spill are available here.)