Clouds over the Black Sea 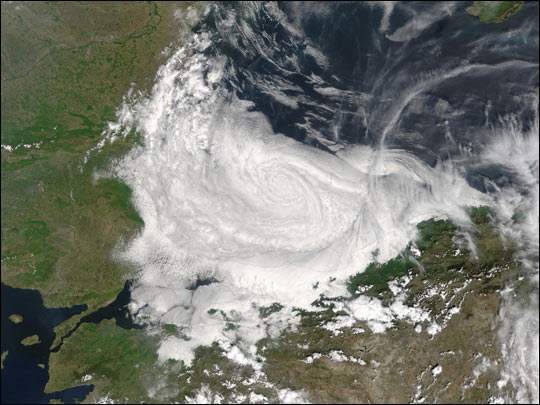 The atmosphere is a dynamic place, as is illustrated by clouds over the southwestern Black Sea in this true-color image from May 3, 2004. At the lowest level, thick white clouds are caught in a swirling air current, which causes the clouds to take on this spiral pattern. At a higher altitude, wispy clouds ride air currents moving independently of lower ones. This is especially noticeable on the right side side of the image.

Together with solar energy and the planet’s magnetic fields, the planet’s atmosphere is what supports life on Earth. Its job is to absorb energy from the Sun, recycle water and other chemicals, moderate the climate, and protect us from high-energy radiation and the cold vacuum of space. Almost all the weather on Earth happens in the lowest layer of atmosphere, known as the troposphere, though that only extends about 15 kilometers (~ 9 miles) above the surface. There are three more layers to the atmosphere before you reach the cold layer of space: the stratosphere (15-60 km), the mesosphere (60-120 km), and the thermosphere (120-600 km). The Terra MODIS instrument, which acquired this image, flies at an altitude of 705 km.

Four countries are shown in this image. Starting from the upper left, they are Romania, Bulgaria, Greece (lower left edge), and Turkey. The Bosporus connects the Black Sea and the Marmara Denizi, which is connected to the Aegean Sea via the Dardanelles. Istanbul sits on the southwestern bank of the Bosporus, while the site of the ancient city of Troy lies near the western opening to the Dardanelles, on the southern side.