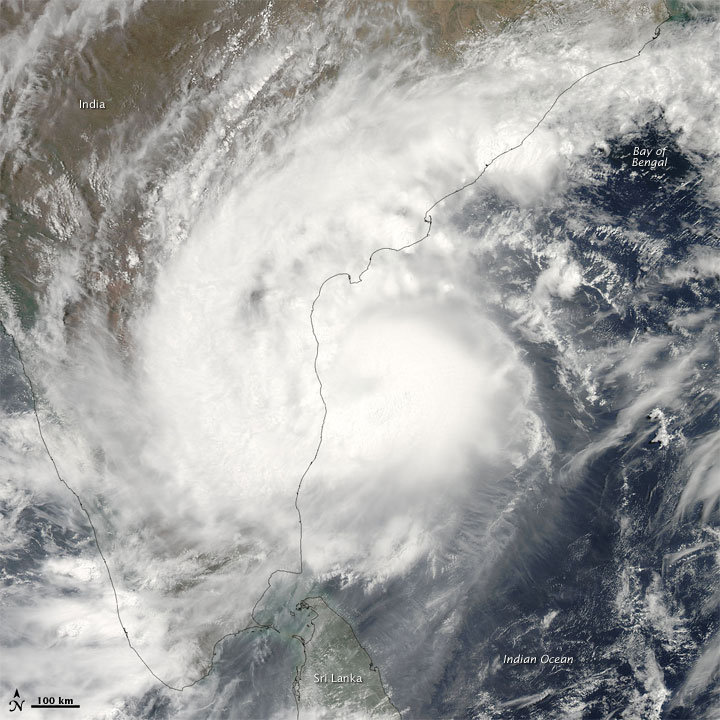 Tropical Cyclone Laila hovered over the eastern coastline of India and the Bay of Bengal and skirted Sri Lanka on May 19, 2010. The Moderate Resolution Imaging Spectroradiometer (MODIS) on NASA’s Aqua satellite captured this natural-color image the same day. Spanning hundreds of kilometers, the storm extends a spiral arm toward the northeast, covering much of India’s coast. In the south, the storm spans most of southern India.

As Laila traveled along the Indian coastline, both the United Nations Office for the Coordination of Humanitarian Affairs and the Dartmouth Flood Observatory reported severe flooding, including some casualties, in India and Sri Lanka. Some of the flooding, however, occurred before Laila developed into a named storm, and was associated with other weather fronts.

Acquired May 19, 2010, this natural-color image shows Tropical Cyclone Laila hovering over the eastern coastline of India.

Tropical Cyclone Laila affected the Bay of Bengal, the northern Indian Ocean, India, and Sri Lanka in late May 2010.