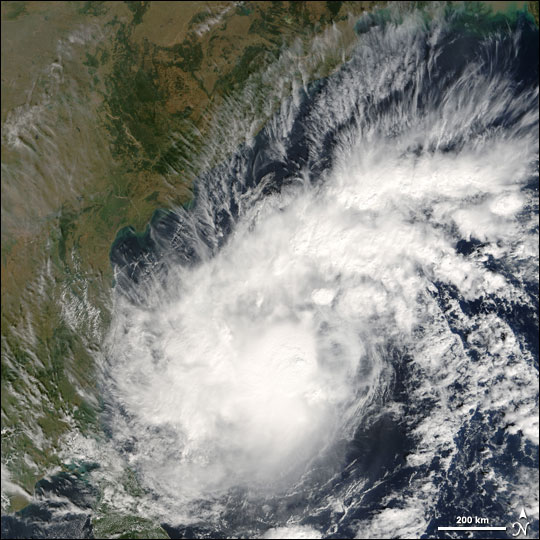 On November 29, 2005, a tropical cyclone brewed in the Bay of Bengal off the southern coast of India near the island of Sri Lanka. This image of the organizing storm, called Baaz, was captured by the Moderate Resolution Imaging Spectroradiometer (MODIS) on Tuesday, November 29, at 5:05 UTC (10:35 a.m. local time). The storm does not have the classical cyclone shape in the image, but some arcing bands of clouds are beginning to take shape to the northeast of the storm’s core, and several areas of “boiling” clouds suggest intense thunderstorm activity.

As of the early afternoon of November 30, the storm had slowed in its west-northwest progress toward land, and forecasters at the Navy’s Joint Typhoon Warning Center were predicting that the storm would be arriving at the coast of India within 48 hours. According to news reports, thousands of people were evacuating the low-lying coastal states of Tamil Nadu and Andhra Pradesh in southern India, areas which were affected by the December 2004 tsunami as well as by flooding in recent weeks.

A ragged-looking Tropical Storm Bijli draped the east coast of India in this image from the Moderate Resolution Imaging Spectroradiometer (MODIS) on NASA’s Terra satellite on April 16, 2009