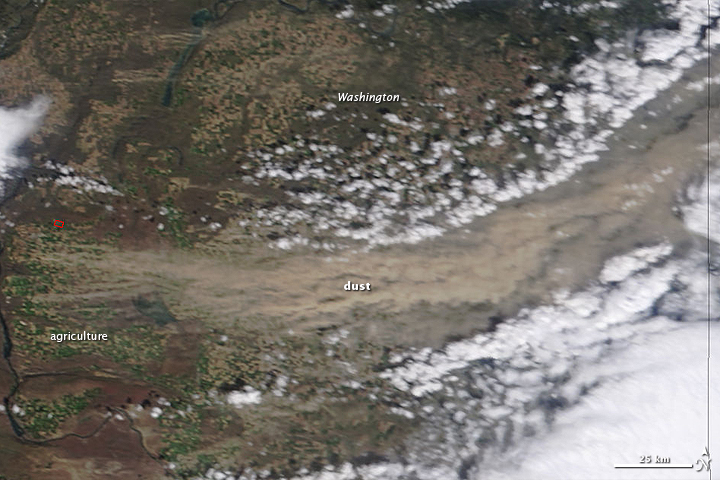 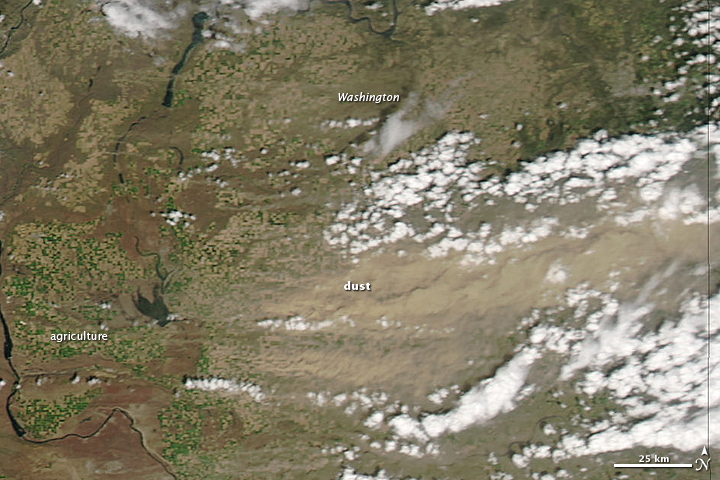 A dark plume of dust extends across nearly half of Washington state in these natural-color images from May 3, 2010. The Moderate Resolution Imaging Spectroradiometer (MODIS) acquired the top image from NASA’s Terra satellite at 12:40 p.m. local time. MODIS on the Aqua satellite took the lower image not quite two hours later, at 2:25 p.m., local time.

In the top image, it is clear that the dust is rising from farmland in central Washington. Tiny dots of green and tan are fields. The dust is coming from tan fields, where crops are not yet growing.

The lower image, from later in the day, shows that new dust was no longer entering the atmosphere. Thick dust from earlier in the day still clouds the skies of eastern Washington, near the border with Idaho (far right).

A strong spring storm brought winds of 40 miles per hour (64 kilometers per hour) to Washington on May 3. The winds blew the dust shown here across the state, forcing several roads to close because of low visibility, said the Associated Press.

The large images provide the highest-resolution view of the dust storm. Both the Terra image and the Aqua image are available in additional resolutions from the MODIS Rapid Response Team.

A dark plume of dust extends across nearly half of Washington state in these natural-color image from May 3, 2010.

A thick, rippling plume of dust runs northeast to southwest through the center of this image of eastern Washington state on October 4, 2009.