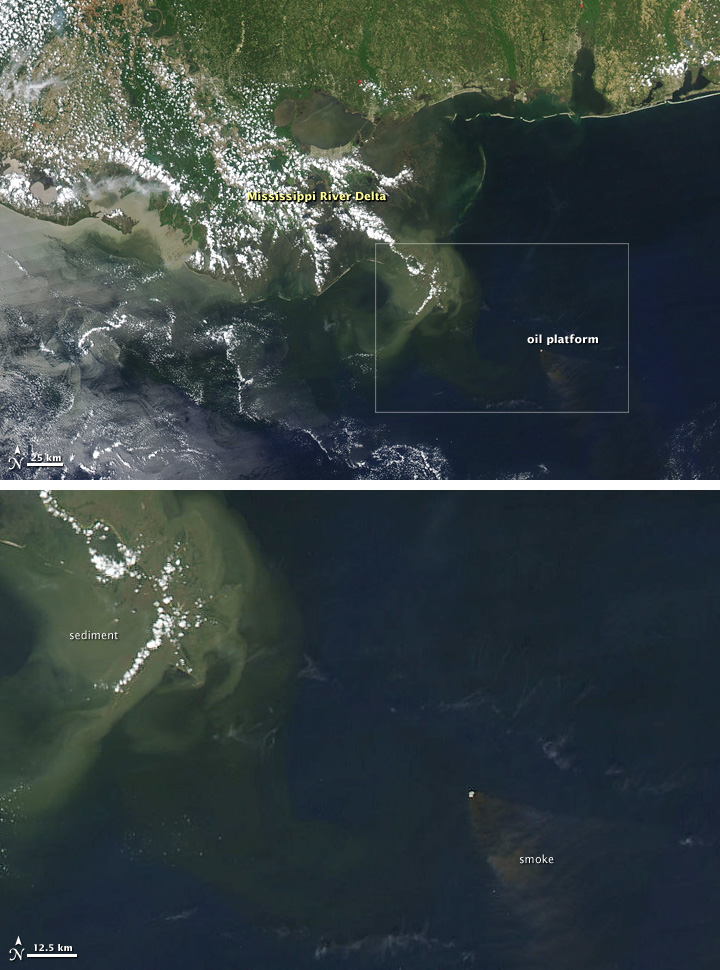 On April 20, 2010, an oil rig explosion in the Gulf of Mexico left a dozen workers missing and several more critically injured and started a large fire that was churning out smoke days later. This image of the Gulf Coast and near-shore waters was captured by the Moderate Resolution Imaging Spectroradiometer (MODIS) on NASA’s Aqua satellite on April 21.

The Mississippi River Delta is speckled with clouds and outlined by a wide border of greenish-tan sediment. A white outline on the top image indicates the area covered by the close-up view below. (The large image shows a wider area at the same resolution as the close-up view.) The oil platform appears as a white dot, and a fan of brown smoke extends to the southeast.

Although photographs show that the damaged rig was leaking oil, no oil slick is obvious in this image. Oil slicks are notoriously difficult to spot in natural-color (photo-like) satellite imagery because a thin sheen of oil only slightly darkens the already dark blue background of the ocean. Under unique viewing conditions, oil slicks can become visible in photo-like images, but usually, radar imagery is needed to clearly see a spill from space.

On July 14, 2010, a silvery gray patch of oil stretched across the Gulf of Mexico about 80 kilometers (50 miles) southeast of the tip of the Mississippi River Delta.

Oil from a leaking well approaches the tip of the Mississippi Delta in this photo-like satellite image from Wednesday, April 28, 2010.