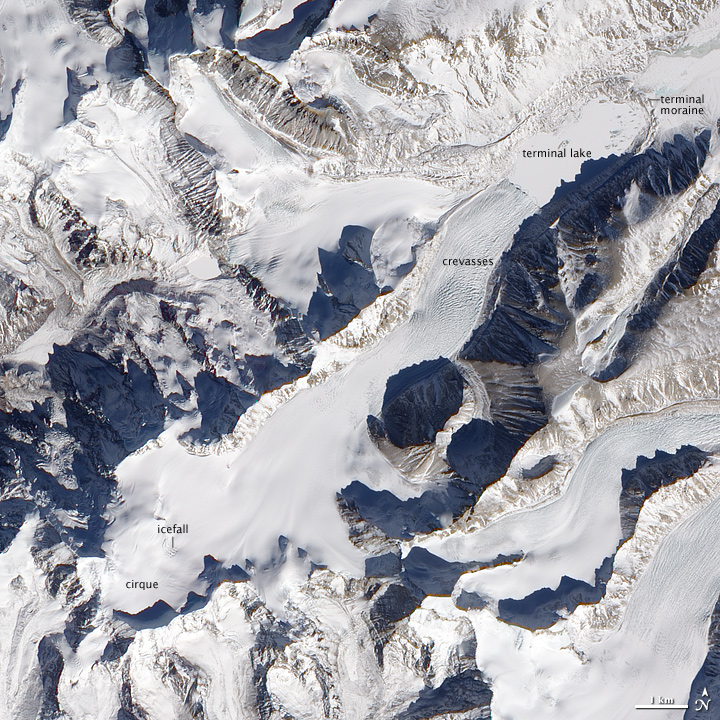 Besides the world’s tallest peaks, the Himalayan Mountain Range holds thousands of glaciers. In southern China, just north of the border with Nepal, one unnamed Himalayan glacier flows from southwest to northeast, creeping down a valley to terminate in a glacial lake. On December 25, 2009, the Advanced Land Imager (ALI) on NASA’s Earth Observing-1 (EO-1) satellite captured this natural-color image of the glacier.

Mountains on either side of the glacier cast long shadows to the northwest. From a bowl-shaped cirque, the glacier flows downhill. Where the ice passes over especially steep terrain, ripple marks on the glacier surface indicate the icefall. Northeast of the icefall, the glacier’s surface is mostly smooth for several kilometers until a network of crevasses mark the surface.

At the end of the glacier’s deeply crevassed snout sits a glacial lake, coated with ice in this wintertime picture. Just as nearby mountains cast shadows, the crevassed glacier casts small shadows onto the lake’s icy surface. This glacial lake is bound by the glacier snout on one end, and a moraine—a mound formed by the accumulation of sediments and rocks moved by the glacier—on the other.

Acquired December 25, 2009, this natural-color image shows a glacier slowly creeping down a valley to terminate in a frozen lake.