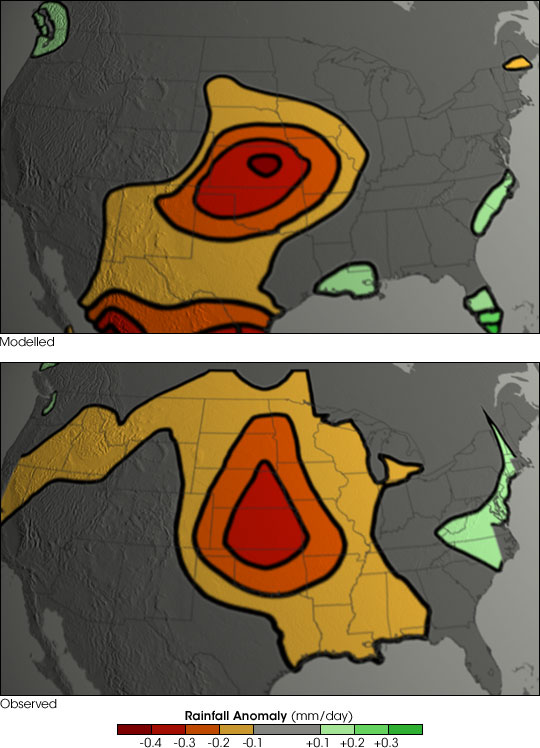 NASA scientists have an explanation for one of the worst climatic events in the history of the United States, the “Dust Bowl” drought, which devastated the Great Plains and all but dried up an already-depressed American economy in the 1930s.

Siegfried Schubert of NASA’s Goddard Space Flight Center, Greenbelt, Md., and colleagues used a computer model developed with modern-era satellite data to look at the climate over the past 100 years. The study found cooler-than-normal surface temperatures in the tropical Pacific Ocean combined with warmer tropical Atlantic Ocean temperatures to create conditions in the atmosphere that turned America’s breadbasket into a dust bowl from 1931 to 1939. The team’s findings, “On the Cause of the 1930s Dust Bowl,” were published in the March 19, 2004, issue of Science magazine.

The illustrations above compare the model results (top image) to rainfall data collected from 1932 to 1938 (bottom image). The model data show extensive drying throughout the Great Plains. The dark red represents the driest areas, followed by light red, then orange, and yellow, which is the least dry. The lower image shows observed rainfall maps. The model results agree well with the observations, validating the model.

“The 1930s drought was the major climatic event in the nation’s history,” Schubert said. “Just beginning to understand what occurred is really critical to understanding future droughts and the links to global climate change issues we’re experiencing today.”