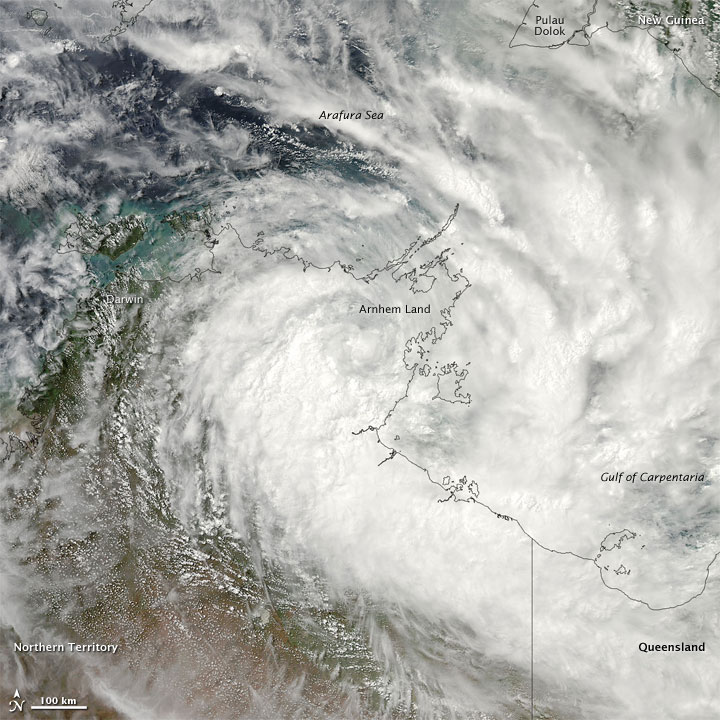 Tropical Cyclone Paul lingered over the northern coast of Australia on March 30, 2010. The Moderate Resolution Imaging Spectroradiometer (MODIS) on NASA’s Aqua satellite captured this natural-color image at 2:25 p.m. Darwin time (14:55 UTC) the same day. The center of the storm occurs over Northern Territory’s Arnhem Land, and clouds stretch across the Gulf of Carpentaria and the Arafura Sea. As they did the day before, storm clouds extend to New Guinea.

At 6:30 p.m. Darwin time (9:00 UTC) on March 30, 2010, the U.S. Navy’s Joint Typhoon Warning Center reported that Tropical Cyclone Paul had maximum sustained winds of 40 knots (74 kilometers per hour) and gusts up to 50 knots (92 kilometers per hour). The storm was located roughly 250 nautical miles (460 kilometers) east of Darwin. Paul was expected to weaken as it moved over land.

Acquired January 28, 2010, this true-color image shows Tropical Cyclone Olga overlapping the coastlines of Northern Territory and Queensland, Australia, and the Gulf of Carpentaria.