Pollution from Fires across Northwest Africa 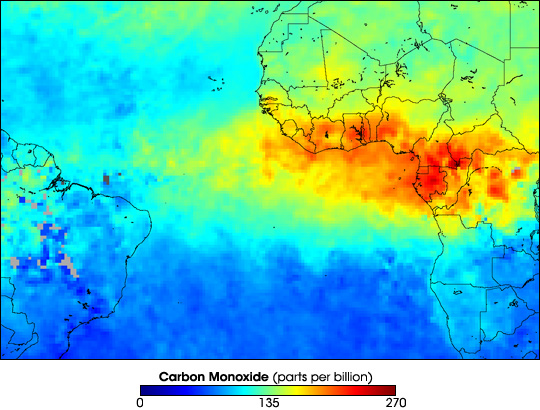 Fires in the savanna south of the Sahara Desert, and in the tropical rainforests at latitudes just north of the equator, form an intense swath of biomass burning across the African continent from December through April each year. This is a region of high grass production and the majority of these fires are not wildfires, but result from agricultural waste burning associated with subsistence farming.

These fires produce large amounts of carbon monoxide, which is a good indicator of atmospheric pollution. The image above represents a composite of data collected over a 25-day period, from February 1-25, 2004, by the Measurements Of Pollution In The Troposphere (MOPITT) instrument aboard NASA's Terra satellite. The colors represent the mixing ratios of carbon monoxide in the air, given in parts per billion by volume at an altitude of roughly 3 km (700 mb). The grey areas show where no data were collected due to persistent cloud cover. The high levels of carbon monoxide form a pollution plume that extends westward from Africa across the Atlantic Ocean to South America. In such high concentrations, carbon monoxide has a significant impact on tropical air quality.

The image above corresponds well with true-color images captured over the region by the Terra MODIS instrument on February 10 and February 17, 2004, which show fires as red and orange dots. Thick dust obscures the scenes, but MOPITT can distinguish the fires’ smoke from the dust.