Snow around the Aral Sea 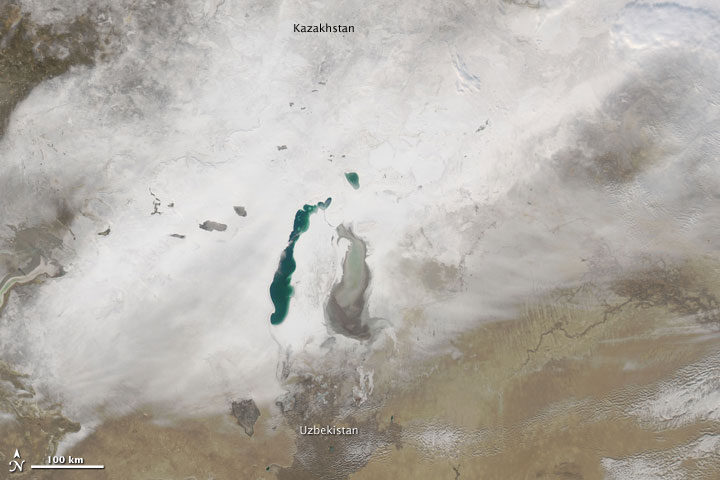 Snow surrounded the Aral Sea in early January 2010. The Moderate Resolution Imaging Spectroradiometer (MODIS) on NASA’s Aqua satellite captured this true-color image on January 8, 2010. A band of snow extends from southwest to northeast, crossing over the Aral Sea. The band of snow thins along its southeastern edge, so snow barely covers the southeastern shore of the sea.

January 2010 also brought the heaviest snowfall in decades to the Beijing region and Seoul, and unusually heavy snow to Western Europe, including Great Britain. Unusually cold temperatures throughout the mid-latitudes of the Northern Hemisphere in December 2009 likely resulted from a negative plunge of the Arctic Oscillation. Land surface temperature anomalies in the region of the Aral Sea, however, were mixed, both above and below the 2000–2008 average.

Acquired January 8, 2010, this true-color image shows snow surrounding the Aral Sea. A broad band of snow that crosses over the sea thins toward the southeast.