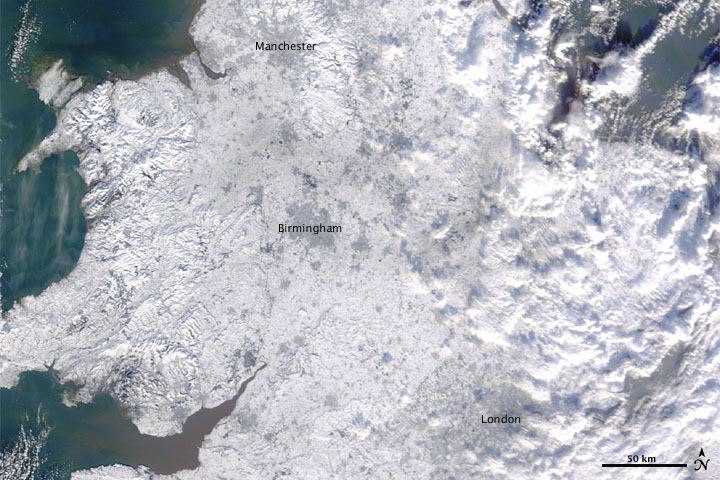 Snow blanketed Great Britain on January 7, 2010, as the Moderate Resolution Imaging Spectroradiometer (MODIS) on NASA’s Terra satellite passed overhead and captured this image. Snow covers most of England, from the east to the west coast. (The large image shows snow cover over the entire island of Great Britain.) The cities of Manchester, Birmingham, and London form ghostly gray shapes against the white land surface. Immediately east of London, clouds swirl over the island, casting blue-gray shadows toward the north.

According to the Federation of Small Businesses, transportation difficulties kept an estimated 10 percent of the workforce home on January 5 and 6, and thousands of schools were closed. Forecasters warned that frigid temperatures could linger for up to a week. Eurostar was operating at a reduced capacity and airports remained open although passengers could expect delays.

A contributor to the persistent cold and snow across much of the Northern Hemisphere’s mid-latitudes in December 2009 and January 2010 could be the fact that the atmosphere was in an extreme negative phase of the Arctic Oscillation (AO). The AO is a seesawing strengthening and weakening of semi-permanent areas of low and high atmospheric pressure in the Arctic and the mid-latitudes. One consequence of the oscillation’s negative phase is cold, snowy weather in Eurasia and North America during the winter months. The extreme negative dip of the Arctic Oscillation Index in December 2009 was the lowest monthly value observed for the past six decades.

Acquired January 7, 2010, this image shows snow blanketing England, from the east to west coast. The cities of Manchester, Birmingham, and London appear as ghostly gray shapes on the icy surface.