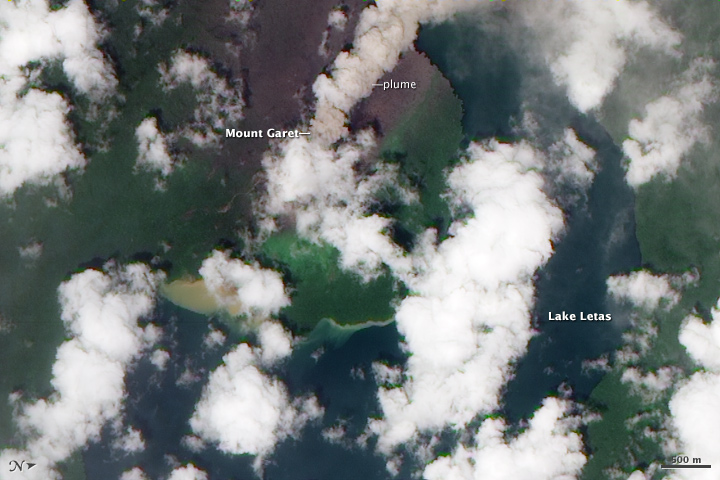 Gaua Volcano, in the South Pacific archipelago Vanuatu, entered an “eruptive phase” on September 27, 2009, according to the Vanuatu Geohazards Observatory. Since then the volcano has exhibited near-continuous emissions of ash and steam, punctuated by intermittent explosions.

This satellite image shows the center of Gaua, including Mont Garet—the volcano’s summit—and the crescent-shaped Lake Letas. The brown-colored plume suggests that the volcano is emitting ash as well as steam and other volcanic gases. Green, relatively healthy vegetation sourrounds Mont Garet on three sides, but the vegetation to the west (top) is brown. It was likely either killed by toxic gases from the volcano or covered with ash. The Advanced Land Imager (ALI) aboard NASA’s Earth Observing-1 (EO-1) satellite captured this image on December 29, 2009.

ReliefWeb reported that 400 people were evacuated from coastal villages to the west of Mont Garet in late November 2009. The Vanuatu Geohazards Observatory measured 3,000 metric tons (7 million pounds) of sulfur dioxide emissions on December 17, 2009 [compared to 800 metric tons (2 million pounds) per day at Kilauea].

A plume of ash and steam rises from Gaua Volcano in this satellite image.

Activity at Gaua Volcano, in the South Pacific archipelago of Vanuatu, began in October 2009 and increased in April 2010. Steam and gas emissions continued into 2013.

A steam-rich volcanic plume rises from Gaua Volcano on April 24, 2010.

A plume of ash and steam rises from Mount Garet—the summit of Vanuatu’s Gaua volcano—in this natural-color satellite image from February 14, 2010.