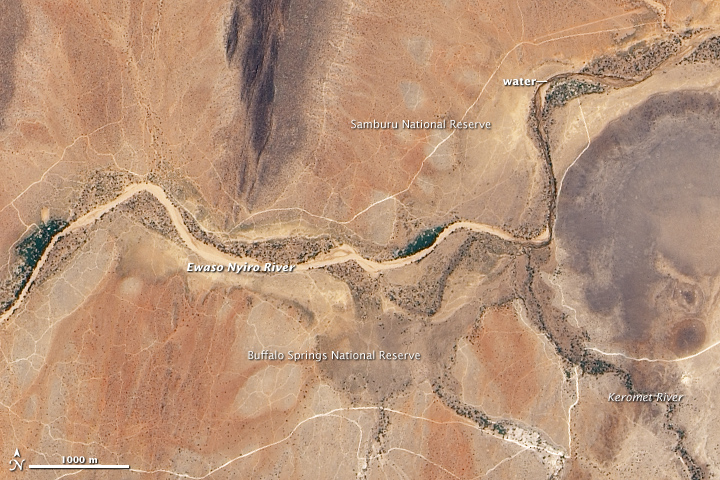 The Ewaso Nyiro River flows down from Mount Kenya to water the dry plains that stretch east from the Great Rift Valley in Kenya. The sparsely populated plains are a haven for wildlife, which rely on the Ewaso Nyiro River as a source of water. Multiple public and private wildlife reserves, including Samburu National Reserve and Buffalo Springs National Reserve, line the banks of the river. In 2009, the river wasted and then went dry as the region sank into severe drought. The dry river bed is exposed in this true-color image, captured by the Advanced Land Imager on NASA’s EO-1 satellite on September 27, 2009.

The arid landscape is tan and orange with darker shades of brown where rock is exposed. The tiny dark green and black dots scattered across the region are trees. The densest clusters of trees are, unsurprisingly, near the rivers, particularly the Ewaso Nyiro. The river itself is a pale tan ribbon of sand. On the right side of the image, a tiny dark line of water trickles through the river. The water appears to be flowing into the Ewaso Nyiro from the Keromet River.

The portion of the river that borders on the Samburu National Reserve had been dry for at least six months by the end of September, reported BBC News. The impact on wildlife was tragic. Samburu National Reserve and other reserves in the region support large herds of elephants, Grevy’s zebras, reticulated giraffes, buffalo, lions, leopards, cheetahs, wild dogs, gazelles, rhinos, and more. By the time this image was taken, at least 24 elephants had died in the region, reported BBC News. Zebras, buffalo, and carnivores were also dying, said Reuters. The impact was not limited to wildlife: many news reports describe decimated herds of goats, cattle, and other livestock among northern Kenya’s pastoralists. As of October 13, the World Food Program was providing food aid for 3.8 million people throughout Kenya.

Severe drought gripped much of East Africa when the rainy season in March through June produced very little rain. At the end of the first rainy season of 2009, satellite observations revealed that plant growth—both crops and natural vegetation—across Kenya was significantly lower than normal, a harbinger of the unfolding disaster. The next rainy period should settle over Kenya in October and last through November or December.