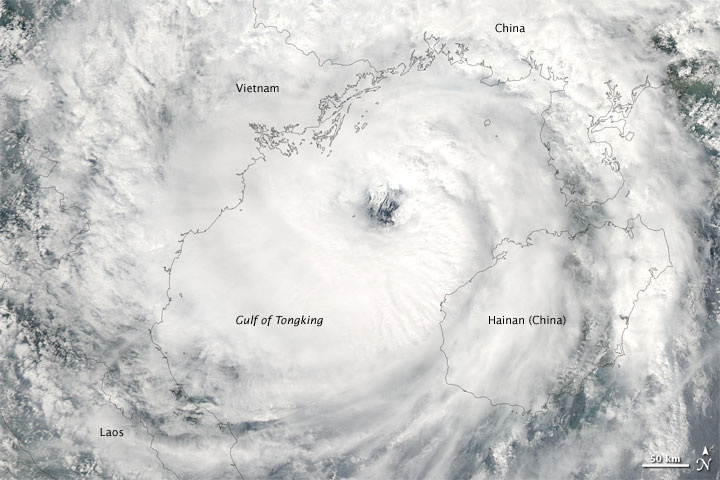 Seventeen days after forming into a tropical storm, Parma remained active on October 13, 2009. The Joint Typhoon Warning Center reported that Tropical Storm Parma had maximum sustained winds of 35 knots (65 kilometers per hour) with gusts up to 45 knots (83 kilometers per hour), as it had the previous day.

The Moderate Resolution Imaging Spectroradiometer (MODIS) on NASA’s Aqua satellite captured this true-color image on October 13, 2009, as Parma hovered over the Gulf of Tongking, between the island of Hainan and the coast of Vietnam. Clouds extended northward into southern China, and westward into Laos.

On October 13, Xinhua reported that Parma had affected 1.63 million people in southern China, forcing more than 36,000 to relocate. Nearly 100 houses had collapsed because of the storm, and almost 230 more had been damaged. The storm also affected 45,000 hectares (nearly 111,200 acres) of farmland.