Floods Across the Western Sahel 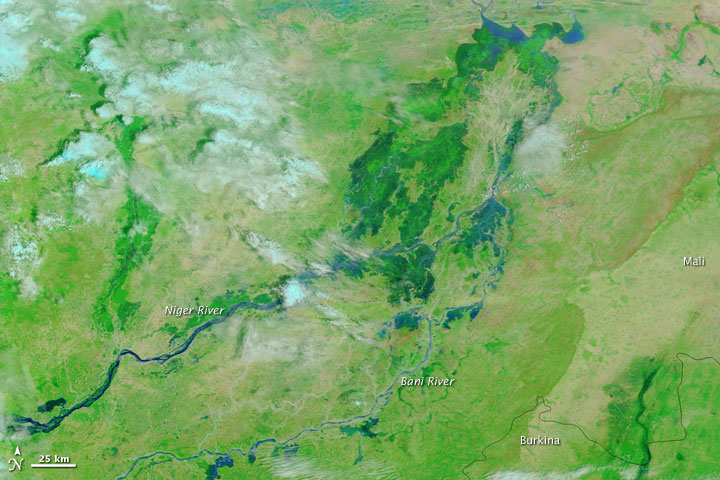 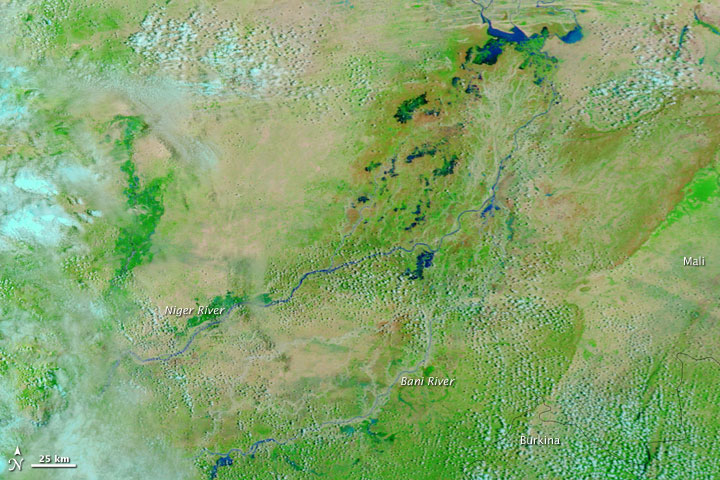 Seasonal floods had soaked Mali’s Inner Niger Delta by mid-September 2009. The Moderate Resolution Imaging Spectroradiometer (MODIS) on NASA’s Terra satellite captured these images of the wetlands along the Niger and Bani Rivers on September 18 (top) and August 24 (bottom). Both images use a combination of infrared and visible light to increase the contrast between water and land. Vegetation appears bright green, clouds appear bright turquoise, and water ranges in color from navy to electric blue. In the later image, water has swollen the tributaries and soaked land that appeared dry weeks earlier.

Classified as a Ramsar site in 2004, the Inner Niger Delta covers some 3 million hectares (approximately 11,600 square miles) and consists of lakes, rivers, floodplains, and flood forests. Ecosystem services from the wetlands—fish, pastureland, agricultural water—support more than a million people.

While rains replenished the wetlands in Mali, precipitation had devastating effects elsewhere in western Africa. As of September 13, 2009, the United Nations estimated that 160 people had been killed and another 600,000 people had been affected by torrential rains. Senegal, Bukina (Burkina Faso), Ghana, Niger, and Sierra Leone were among the hardest-hit nations.

These false-color images show the Inner Niger Delta in Mali on August 24, 2009,and September 18, 2009. The September 18 image shows wetlands soaked by rains.