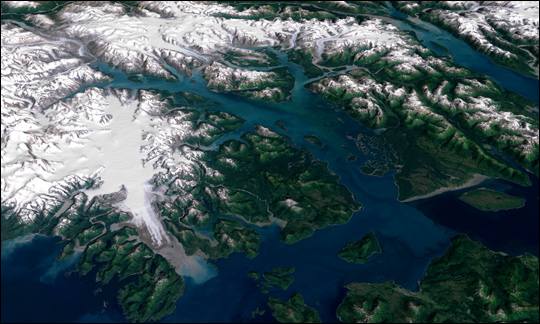 Glacier Bay National Park and Preserve lies on the Pacific Coast of Alaska south of the St. Elias mountain range. The first recorded charting of the area was done in 1794 by George Vancouver, in which he showed the bay being a small indentation in the Icy Strait with a gigantic glacier stretching off to the horizon. Yet by 1879 when the same area was visited by naturalist John Muir, the ice had retreated more than 50 km (30 miles) inland. By 1916, the retreat had doubled this distance. Thus, the bay area is a natural study ground for recolonization of freshly revealed land. The bay was set aside as a National Monument in 1925 and became its current National Park and Preserve in 1980, when approximately 85 percent of the park was designated a Wilderness Area. It has since been recognized as a UN Biosphere Reserve, in 1986, and a World Heritage Site, in 1992.

The water in the foreground in the southwest (bottom left) corner of the image is the Gulf of Alaska, with Icy Strait running roughly west to east (horizontally) in from Cape Spencer where the strait meets the Pacific. The foreground glacier is the Brady Glacier. The light gray feature at the foot of the glacier is fine silt dropped by the glacier as it melts. The glacier’s meltwater washes the silt into the Strait, coloring the shallow waters light blue as the silt mixes. The long finger of water dominating the entire scene is Glacier Bay itself. The two points of land at the beginning of the Bay are roughly where the Grand Pacific Glacier ended when George Vancouver’s crew surveyed the area. The Grand Pacific Glacier now terminates well above Tar Inlet, the finger of water stretching furthermost north (up) at the top of Glacier Bay. The first major inlet on the east (right) coming up from the mouth of Glacier Bay is Muir Inlet. The glaciers feeding into the bay terminated here around 1860. The body of water paralleling the Bay on the eastern edge is Lynn Canal, a body of water also draining into Icy Strait beyond the eastern boundary of the park.

As new land has been revealed by the retreating glaciers, a sequence of new species have gradually moved into the exposed areas. Early pioneering species such as lichens, algae, and mosses settle in first, establishing a bed into which fireweed, horsetail, and willow shrubs then grow as their spores and seeds are brought in by birds or by the wind. Cottonwood is usually among the first of the tree species to take root and make stable land into which more mature species can take root. Spruce, hemlock, blueberries, and skunk cabbage are among the mature species that take hold in the decades after cottonwood takes hold. All told, scientists record around 420 plant species currently ranging through the park.

Marine species have also been able to move into the Bay as the ice has retreated, but other ice sheet sections beyond the park still pose significant barriers to migrating land mammal species. The entire coastal region well south and inland was covered in ice during the last major ice age, and retreat of this ice sheet inland of the park has been less dramatic. Recolonizing species present so far include coyotes, wolf, moose, mountain goats, and brown bears—all of which are highly mobile species. Smaller mammals include marmots, voles, and wolverines. In the Bay itself, Humpback Whales, Killer Whales, Stellar Sea Lions, and Otters have all moved into the area.

The image above is a visualization created by merging imagery from the Landsat 7 satellite’s Enhanced Thematic Mapper Plus (ETM+) instrument with elevation data from the USGS National Elevation Dataset (NED). This true-color image was created by combining the red, green, and blue wavelengths (ETM+ bands 3, 2, and 1). The resulting image was then draped over a visualization of the NED data with no vertical exaggeration. The USGS NED is a merged data product created from from several sources, prodominately 30-meter resolution elevation data collected by NASA’s Shuttle Radar Topography Mission (SRTM).

SRTM flew on the Space Shuttle Endeavour, launched on February 11, 2000. SRTM used the same radar instrument that comprised the Spaceborne Imaging Radar-C/X-Band Synthetic Aperture Radar (SIR-C/X-SAR) that flew twice on the Space Shuttle Endeavour in 1994. SRTM was designed to collect three-dimensional measurements of the Earth’s surface. To collect the 3-D data, engineers added a 60-meter-long (200-foot) mast, installed additional C-band and X-band antennas, and improved tracking and navigation devices. The mission is a cooperative project between the National Aeronautics and Space Administration (NASA), the National Imagery and Mapping Agency (NIMA) of the U.S. Department of Defense (DoD), and the German and Italian space agencies. It is managed by NASA’s Jet Propulsion Laboratory, Pasadena, CA, for NASA’s Earth Science Enterprise, Washington, D.C.

The first recorded charting of the area was done in 1794 by George Vancouver, in which he showed the bay being a small indentation in the Icy Strait with a gigantic glacier stretching off to the horizon.