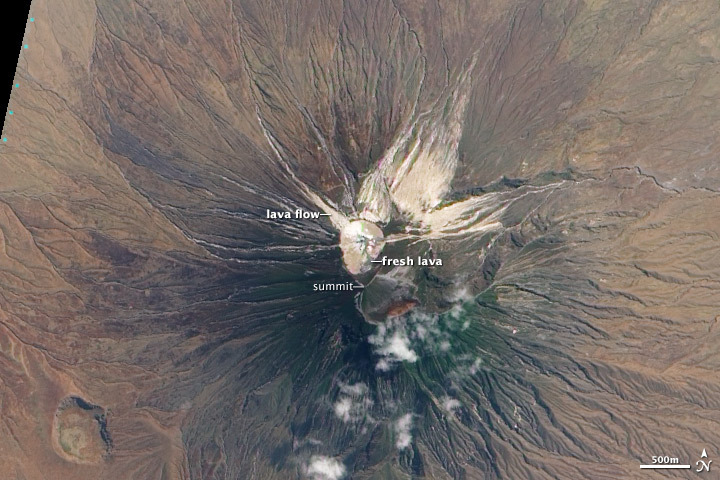 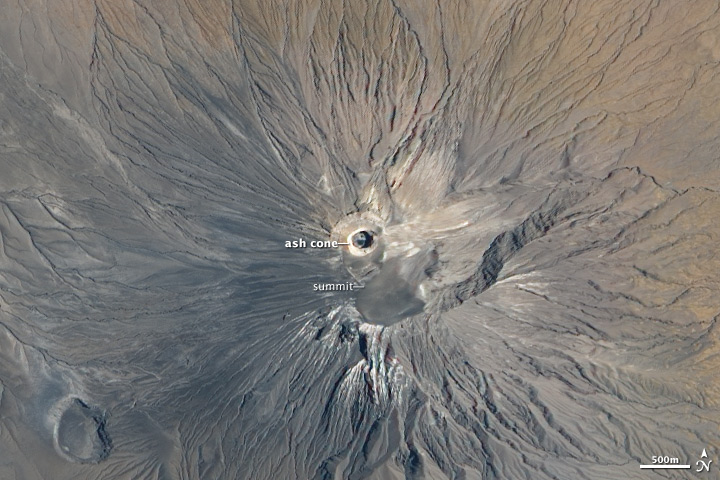 Ol Doinyo Langai in Tanzania is the only volcano in the world that erupts natrocarbonatite lava, which is rich in calcium, sodium, and potassium, but low in silica (silicon dioxide). The lava of Ol Doinyo Lengai is extremely cool (500–600° C, compared to 1,160° C for typical basaltic lava) and relatively fluid. Ol Doinyo Lengai alternates between eruptions of liquid lava that form lava lakes and fountains (called effusive eruptions) and explosive eruptions that build large cinder and ash cones.

The natural-color images above show the changes on Ol Doinyo Lengai’s summit caused by the switch from a long period of effusive eruptions to a series of violent explosions. The top image, acquired on July 16, 2004, by the Advanced Land Imager (ALI) aboard the Earth Observing-1 satellite shows the summit after a long period of effusive eruptions. Beginning in 1983, lava began to fill the crater of an ash cone that formed during explosive eruptions in 1966 and 1967. Over time, the lava filled the crater and created a large flat platform. Dark areas on the crater floor are recent lava flows (days to weeks old), while the beige and white regions are older lava that have reacted with rain and moisture in the atmosphere. In 1998, lava began to spill over the rim of the crater to the north and east. These lava flows are visible as beige fingers radiating down the sides of the mountain. Dark green vegetation covers the upper slopes of the volcano.

In September 2007, explosive eruptions began on Ol Doinyo Lengai, spewing ash thousands of meters into the air. Ash also covered the surrounding landscape, forcing local residents—primarily herders—to flee with their livestock. Explosive eruptions continued into 2008, building a cone over 100 meters (330 feet) high that enclosed a steep-walled crater. The new cone and crater are clearly visible in the center of the ALI image acquired on September 12, 2009. The dark spot in the crater may be fresh lava erupted from a new volcanic vent. Gray ash covers the volcano and much of the surrounding landscape.