Australian Dust over the Pacific Ocean 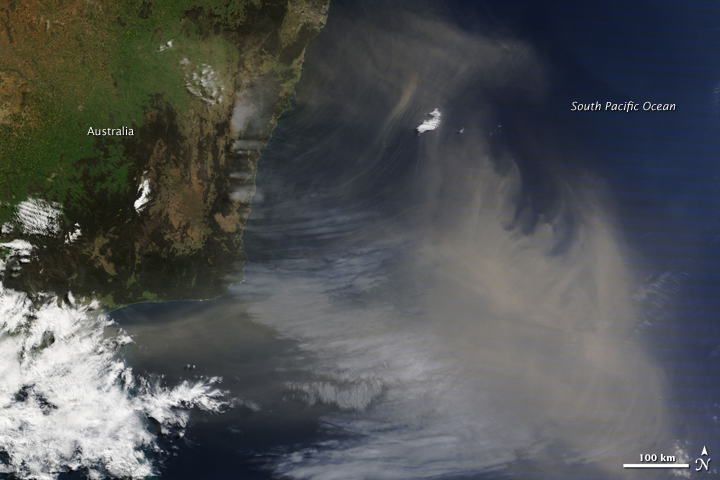 Strong winds from Australia’s desert interior tugged a thick cloud of dust over southeastern Australia and the South Pacific Ocean. The Moderate Resolution Imaging Spectroradiometer (MODIS) on NASA’s Terra satellite captured this true-color, photo-like image of the dust storm on September 12, 2009. The tan cloud is thick and concentrated, forming a coherent mass over the water. By September 14, the dust would cloud skies over New Zealand, reducing visibility to less than 10 kilometers, said The Press, a New Zealand newspaper.

A small plume south of the Australian coast reveals where the dust was coming from. According to news reports, the dust originated from the Lake Eyre basin, a vast lake that fills only during the rainy season of exceptionally wet years, but remains dry during other seasons. As water evaporates from the lake, it leaves a fine layer of sediment that is easily lifted in the wind. Sediment from dry lakebeds is a significant source of airborne dust worldwide.

The large image provided above has a resolution of 250 meters per pixel. The image is available in additional resolutions from the MODIS Rapid Response System.

Dust blown from the Lake Eyre basin forms a dense tan cloud over the Pacific Ocean.