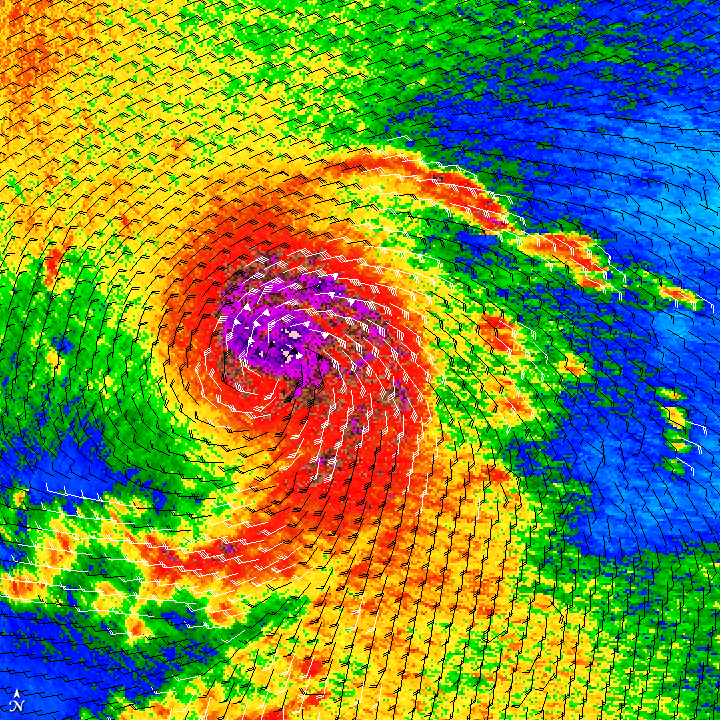 NASA’s QuikSCAT satellite captured this view of Hurricane Fred on September 10, 2009, shortly after 4 p.m. Atlantic Daylight time. At the time, Fred had winds of about 150 kilometers per hour (90 miles per hour), making it a Category 1 hurricane according to the National Hurricane Center. This image shows the wind structure of the storm. The strongest winds are purple, and the weakest are blue. Like all tropical storms, Fred has a core of strong winds surrounded by gradually weakening winds. The storm exhibits a distinctive “s” shape—a structure left over, perhaps, from its time as a Category 4 storm.

QuikSCAT is a scatterometer that measures wind speed by bouncing microwave pulses off the ocean’s surface and recording the echo. An ocean tossed by strong winds will scatter the energy differently than a calm ocean, so the measurement provides an indication of both wind speed and direction. However, since hurricanes are relatively rare, scientists have not calibrated the data to accurately report wind speeds greater than 50 knots (about 60 miles per hour or 90 kilometers per hour). Heavy rain also distorts the ocean’s surface, making wind speeds more difficult to gauge. As a result, this image shows relative wind speeds rather than providing an accurate reporting of actual wind speeds.