Flooding Along the Brahmaputra River 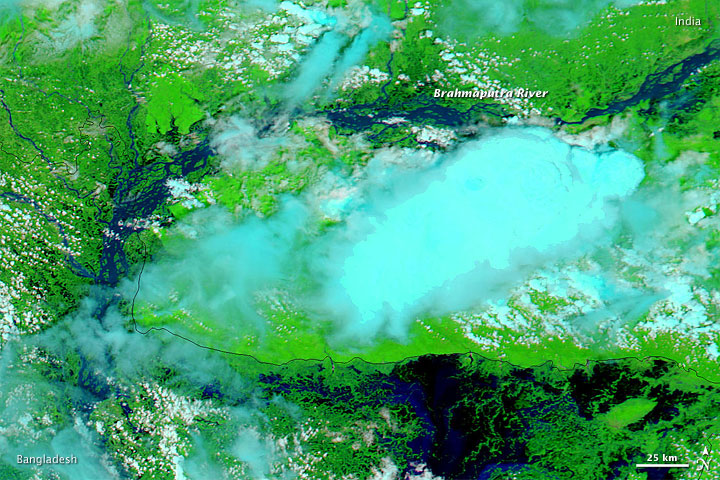 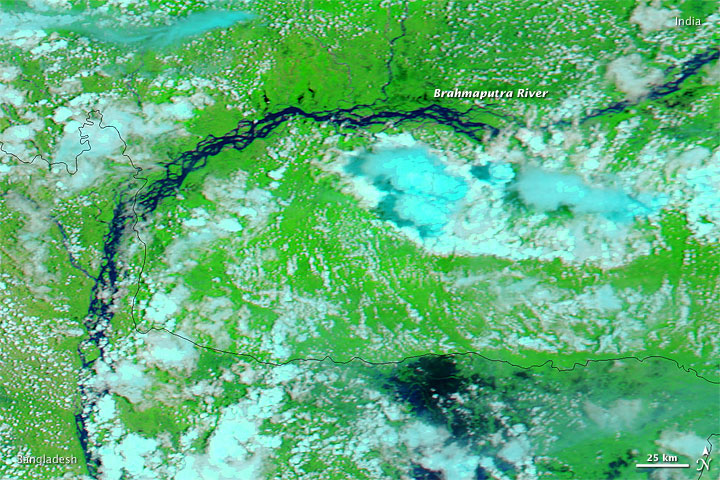 Although Bangladesh had suffered from drought just a month earlier, heavy rains arrived in August 2009. The overdue monsoon rains had swelled the Brahmaputra River and many of its tributaries by late August.

The Moderate Resolution Imaging Spectroradiometer (MODIS) on NASA’s Aqua satellite captured the top image on August 26, 2009, and the bottom image July 23, 2009. Both images use a combination of infrared and visible light to increase the contrast between water and land. Vegetation appears bright green, clouds appear bright turquoise, and water ranges in color from navy to electric blue. The images show a stretch of the Brahmaputra River as it passes through eastern India and neighboring Bangladesh. Although clouds obscure part of the river in the later image, its expanded width is unmistakable. In the west, where the river curves to the south and east, tributaries that were barely discernible in late July are conspicuous in late August.

According to the United Nations Office for the Coordination of Humanitarian Affairs – Integrated Regional Information Networks, the overdue rains left hundreds of thousands of residents stranded, and flooded tens of thousands of hectares of crops, which were presumed destroyed. The Flood Forecasting and Warning Centre warned that, if rains continued unabated through the end of the month, as much as 30 percent of Bangladesh could be inundated. Floods along the Brahmaputra River, however, are not unusual. A flood in September 2007 caused the river’s braided waterways to coalesce into one swollen river.

Acquired on July 23 and August 26, 2009, these false-color images show flood-related changes in a stretch of the Brahmaputra River. In the later image, the river is visibly swollen, and nearby tributaries have also filled.