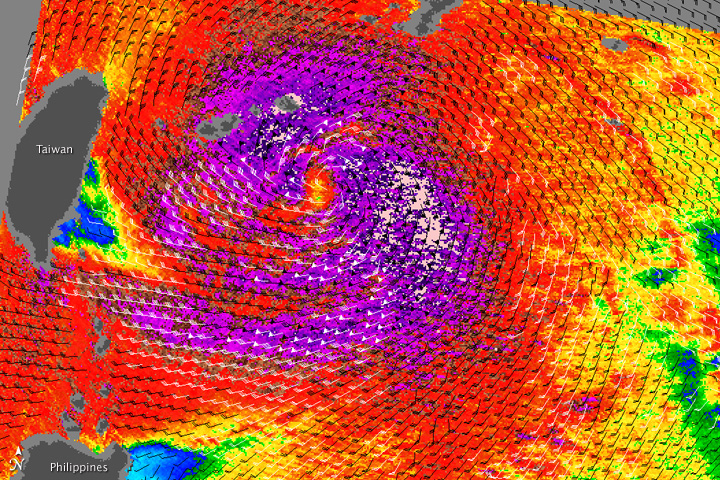 Strong winds surround a calm center in this visualization of Typhoon Morakot. The image was made with wind observations collected by NASA’s QuikSCAT satellite on August 6, 2009. The strongest winds are pink, purple, and red, while areas of calmer winds are blue and green. Barbs indicate the wind direction, and white barbs indicate regions of heavy rain.

At the time this image was taken, Morakot was a Category 1 storm with sustained winds estimated at 150 kilometers per hour (90 miles per hour or 80 knots), according to the Joint Typhoon Warning Center. It was moving towards Taiwan, and would come ashore on August 7.

QuikSCAT measures wind speeds over the ocean by sending pulses of microwave energy through the atmosphere to the ocean and measuring the energy that bounces back from the wind-roughened surface. The energy of the microwave pulses changes depending on wind speed and direction, giving scientists a way to monitor wind around the world. Intense rain rippling on the ocean’s surface and the relative rarity of the extreme winds seen in a tropical cyclone make it difficult to accurately measure wind speeds above 50 knots using the satellite scatterometer. QuikSCAT images provide, instead, a valuable picture of the wind structure within the storm.