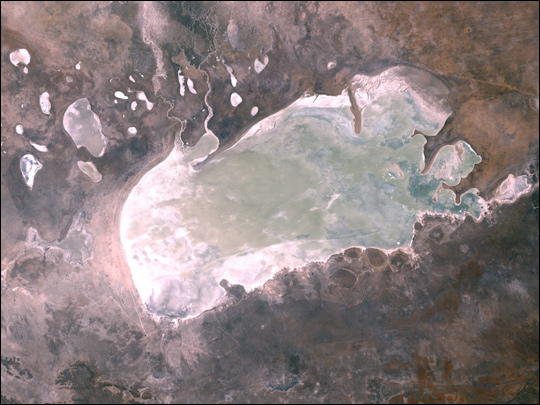 Etosha National Park in Namibia was first established in 1907, when Namibia was a German colony known as South West Africa. At the time, the park’s original 100,000 square kilometers (38,500 square miles) made it the largest game reserve in the world. Due to political changes since its original establishment, the park is somewhat less than a quarter of its original size, but still remains a very large and significant area in which wildlife is protected.

The Etosha Pan dominates the park. The salt pan desert is roughly 130 kilometers long and as wide as 50 kilometers in places. The salt pan is usually dry, but fills with water briefly in the summer months, when it attracts pelicans and flamingos in particular. Periannual springs attract a variety of game and birds throughout the year, including the endangered black rhino and the endemic black face impala.

In the dry season, winds blowing across the salt pan pick up saline dust and carry it across the country and out over the southern Atlantic. This salt enrichment provides minerals to the soil downwind of the pan on which some wildlife depends, though the salinity also creates challenges to farming and agriculture.

The Etosha Pan was one of several sites throughout southern Africa in the Southern African Regional Science Initiative (SAFARI 2000). Using satellite, aircraft, and ground-based data from sites such as Etosha, partners in this program collected a wide variety of data on aerosols, land cover, and other characteristics of the land and atmosphere to study and understand the interactions between people and the natural environment.

This scene was acquired by the Landsat 7 Enhanced Thematic Mapper Plus (ETM+) on September 11, 1999. This natural color composite uses red, green, and blue wavelengths (ETM+ bands 3, 2, and 1 respectively).