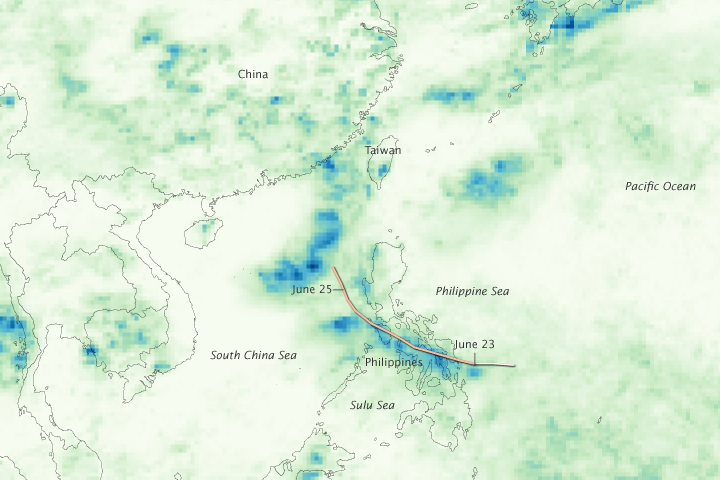 Tropical Storm Nangka passed through the Philippines in late June 2009, bringing floods, landslides, and tornadoes. The tropical depression strengthened to a tropical storm on June 23 and headed northwest in the direction of mainland China. According to a bulletin from the Joint Typhoon Warning Center issued on June 25, the storm had sustained winds of 74 kilometers per hour (40 knots), with gusts up to 93 kilometers per hour (50 knots), and it could produce waves up to 4.3 meters (14 feet) high.

This image shows rainfall in the vicinity of the South China Sea between June 18 and June 25, 2009, made with data from the Tropical Rainfall Measuring Mission (TRMM) satellite. The greatest amounts of rainfall—up to 400 millimeters (15.7 inches)—appear in deep blue. Superimposed onto the rainfall amounts is a storm track for Nangka. The color shift on the storm track indicates where the storm intensified from a tropical depression to a tropical storm, with wind speeds of at least 65 kilometers per hour (35 knots).

By June 25, 2009, eight casualties had been reported, and eleven more people were missing, according to news reports. Four fishermen died when their boat was caught in a tornado, two died from drowning, and two more perished in landslides. 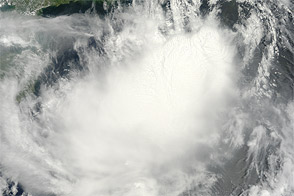