Dust Over the Aral Sea 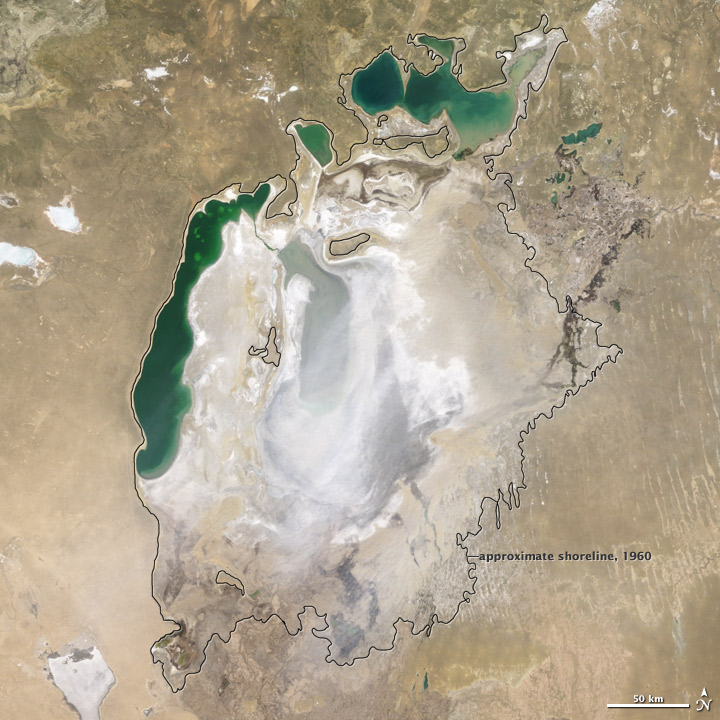 In the 1960s, the Soviet Union undertook a major water diversion project on the arid plains of Kazakhstan, Uzbekistan, and Turkmenistan. The region’s two major rivers, fed from snowmelt and precipitation in far-away mountains, were used to transform desert into fields for cotton and other crops. Before the project, the two rivers left the mountains, cut northwest through the Kyzylkum Desert—the Syrdar’ya to the north and the Amudar’ya in parallel to the south—and finally pooled together in the lowest part of the desert basin. The lake they made, the Aral Sea, was once the fourth largest lake in the world.

Although irrigation made the desert bloom, it devastated the Aral Sea. This image of the lake from the Moderate Resolution Imaging Spectroradiometer (MODIS) on NASA’s Terra satellite on May 3, 2009, shows one of the unintended but dangerous consequences of the declining water levels: frequent dust storms.

The exposed lakebed is a source of salt-laden soil, and in the arid climate, winds scour the dust from the ground. The dust is a public health hazard because it contains pesticides and other agricultural chemicals that have washed into the evaporating lake from upstream farms. The sediments are salty, and they degrade the soil of farms where they settle. As salt builds up in the growing areas, the demands on the rivers grow as farmers flush the ground with larger and larger volumes of water.

Our new feature World of Change: Evaporation of the Aral Sea provides images of the lake over the past decade. The series shows the continued decline of the southern Aral Sea, as well as the beginning of recovery in the Northern Sea since 2005.

NASA image by Jesse Allen and Robert Simmon, based on data from the MODIS science team. Caption by Rebecca Lindsey.

This NASA satellite image of the Aral Sea from May 3, 2009, shows one of the dangerous consequences of declining water levels: frequent dust storms.

The North Aral Sea owes its rebirth to the Kok-Aral Dam, an $85.8 million project bolstered by a loan from the World Bank. The dam separates the North Aral Sea from its saltier and more polluted southern half. In early 2006, the Embassy of the Republic of Kazakhstan announced that the Aral Sea had shown dramatic recovery in just months, rather than the five to ten years originally predicted.