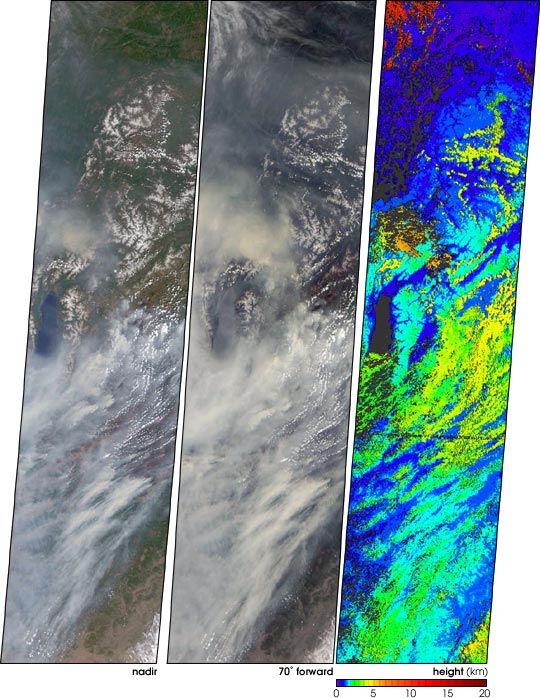 During the 2003 fire season, blazes in the taiga forests of Eastern Siberia were part of a vast network of fires across Siberia and the Russian Far East, northeast China and northern Mongolia. Fires in Eastern Siberia have been increasing in recent years, and the 2003 spring and summer seasons are the most extensive recorded in over 100 years. Overall, the Russian Federation experienced a record-setting fire year, with over 55 million acres burnt by early August, according to the Global Fire Monitoring Center. These data products from the Multi-angle Imaging SpectroRadiometer (MISR) illustrate the extent and height of smoke from numerous fires in the Lake Baikal region on June 11, 2003.

The left and center panels are natural-color views from MISR’s vertical-viewing (nadir) and 70-degree forward-viewing cameras, respectively. The steeply-looking camera enhances the appearance of smoke, such that many areas, including Lake Baikal (the long dark water body along the left-hand image edge), are almost completely obscured by smoke at the oblique view angle. The image area includes part of the Russian states of Irkutsk, Buryatia, and Chita, as well as northern Mongolia, with these areas stretching from upper-left to bottom-right, respectively.

On the right is a map of stereoscopically retrieved heights for features exhibiting sufficient spatial contrast. The heights correspond to elevations above sea level. Taking into account the surface elevation, the smoke plumes range from about 2-5 kilometers above the surface. Larger heights are mostly associated with clouds. Areas where heights could not be retrieved are shown as dark gray.

Fire is an important ecological factor in the taiga forests, but in this region a combination of dry conditions and increased human exploitation during recent decades can increase the frequency and extent of fires and alter the historical fire regime. It is important to consider the effects of changing fire regimes from a climatological point of view, since the complex interactions between aerosols (tiny airborne particles), clouds, surfaces and the hydrological cycle are the main source of uncertainty in global climate models.

The Multi-angle Imaging SpectroRadiometer observes the daylit Earth continuously and every 9 days views the entire globe between 82 degrees north and 82 degrees south latitude. The MISR Browse Image Viewer provides access to low-resolution true-color versions of these images. This data product was generated from a portion of the imagery acquired during Terra orbit 18506. The panels cover an area of about 400 kilometers x 1600 kilometers, and utilize data from blocks 41 to 54 within World Reference System-2 path 130.