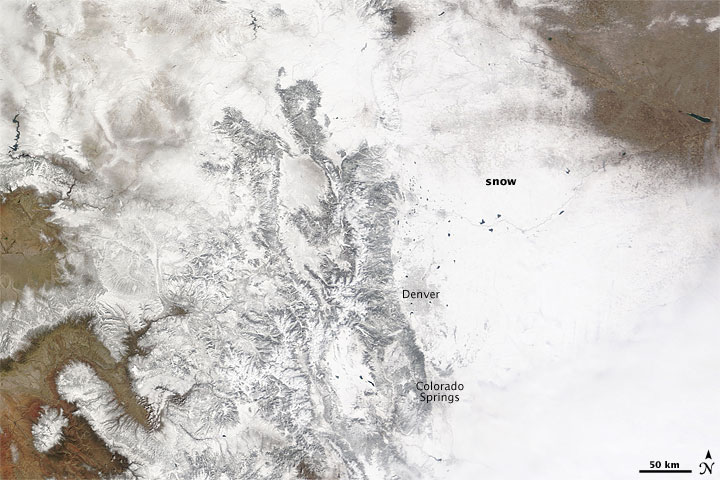 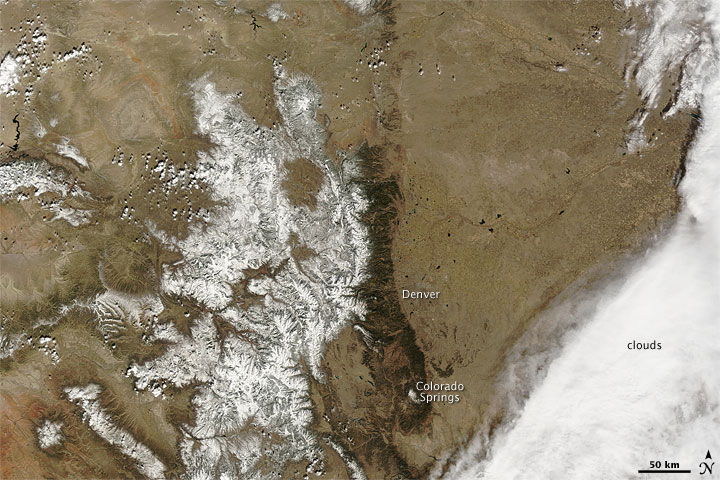 On March 22, 2009, a grassfire broke out in Fairplay, Colorado, a foothills community west of Denver. Although quickly quelled, the fire was unsettling. If vegetation could burn so easily in early spring, what might summer bring? Although the winter of 2008-2009 had brought plentiful snow to Colorado’s central mountains, snow on the Front Range—the state’s most populous region, just east of the Rocky Mountains—had been scarce. Tinder-dry vegetation looked poised to burn throughout the summer.

Within days of the fire, however, Colorado’s Front Range received much-needed moisture. Acquired by the Moderate Resolution Imaging Spectroradiometer (MODIS) on NASA’s Terra satellite, these images show Denver and the surrounding region on March 27, 2009 (top), and March 22, 2009 (bottom). One day after the blizzard, the top image shows the area in a sea of snowy white. On March 22, however, snow is confined largely to mountainous areas, with tan predominating elsewhere.

The blizzard that struck the state on March 26 closed businesses, schools, and even highways, and it caused the cancellation of hundreds of flights at Denver International Airport. Unpleasant as the storm proved for commuters, however, it alleviated—but did not eliminate—the drought hazard facing the Front Range.

A pair of images from the MODIS sensor on NASA’s Terra satellite shows Denver and the Front Range of the Rocky Mountains before and after a spring snow storm blanketed the area in white on March 27, 2009.

Spring Snow Storm over the US Central Plains

An intense spring snow storm buried Denver, Colorado, in as much as 17 inches of snow before continuing east across the Central Plains.

The even grid of Denver’s streets is visible beneath the snow laid down by a storm on March 26, 2009.