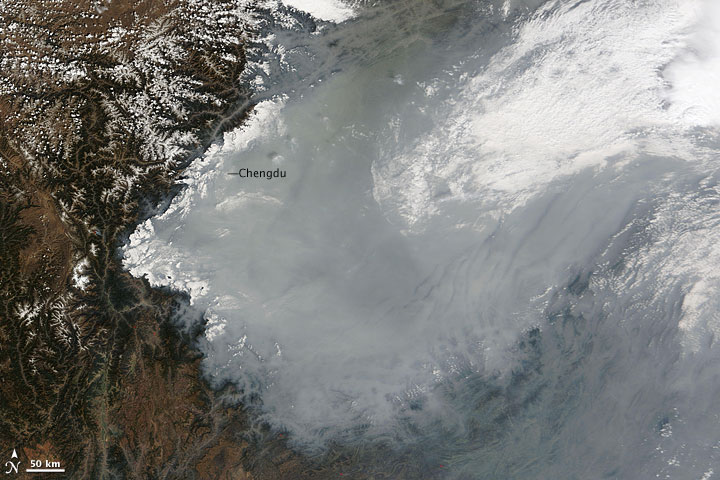 Thick haze clogged the air over China’s Sichuan Basin in late March 2009, mimicking the pattern from the previous month. The Moderate Resolution Imaging Spectroradiometer (MODIS) on NASA’s Terra satellite captured this image on March 21, 2009. Contrasting with the opaque white clouds in the area, the haze appears translucent gray, and it allowed the satellite only a fuzzy glimpse of the basin’s striking topography near its eastern edge. The haze ends abruptly where the land rises along the north- and southwestern margins of the basin. West of the basin, skies appear clear. East of the basin, however, haze continues.

To some degree, the thick-looking haze along the right edge of this image results from that area being close to the edge of the satellite swath, where MODIS’ viewing angle is oblique (far off to the side, rather than straight down). The oblique angle means the sensor is looking through a thicker layer of atmosphere (i.e., a longer path.)

The haze in the Sichuan Basin probably results from urban and industrial pollution, and cold air currents can trap pollutants at the surface. If the haze results in part from burning organic matter such as coal or wood, it may also include water vapor as well as particulate matter.

Haze over the Sichuan Basin

Acquired May 6, 2011, this natural-color image shows haze in the Sichuan Basin.

A combination of clouds and heavy haze hung over the Sichuan Basin in late February 2009.