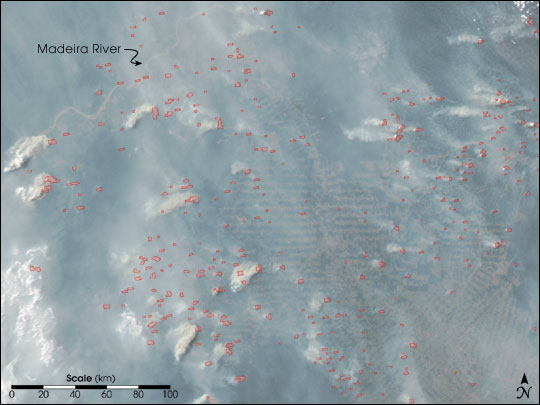 Scientists estimate humans burn an average of 175 million acres of forest and grassland every year, most of it in the tropics. In some parts of the world—such as the rainforests of Amazonia—the rate of biomass burning has intensified in recent years. (For more details, refer to these fact sheets on Biomass Burning and Tropical Deforestation.)

This true-color image was aquired by the Moderate Resolution Imaging Spectroradiometer (MODIS), flying aboard NASA’s Aqua satellite, on August 31, 2003. In this scene, the smoke (whitish-gray haze that fills the image) from a large number of fires (red polygons) fills the sky above Rondonia, Brazil, and almost completely blots out the sensor’s view of the surface. The familiar herringbone pattern of deforested land is unmistakable in the center and lower righthand corner of the image. The Madeira River can be seen wending its way through the upper left portion of the scene.

Such burning episodes not only disrupt the local forest ecosystem, but they also dramatically influence the atmosphere’s chemical make-up by releasing large amounts of gases and aerosols into the air. The MODIS sensors aboard both Terra and Aqua were designed to help scientists monitor fires on a global scale and to help them better estimate how much area humans burn every year as well as how much biomass burning contributes to the ongoing increase in levels of atmospheric carbon dioxide.