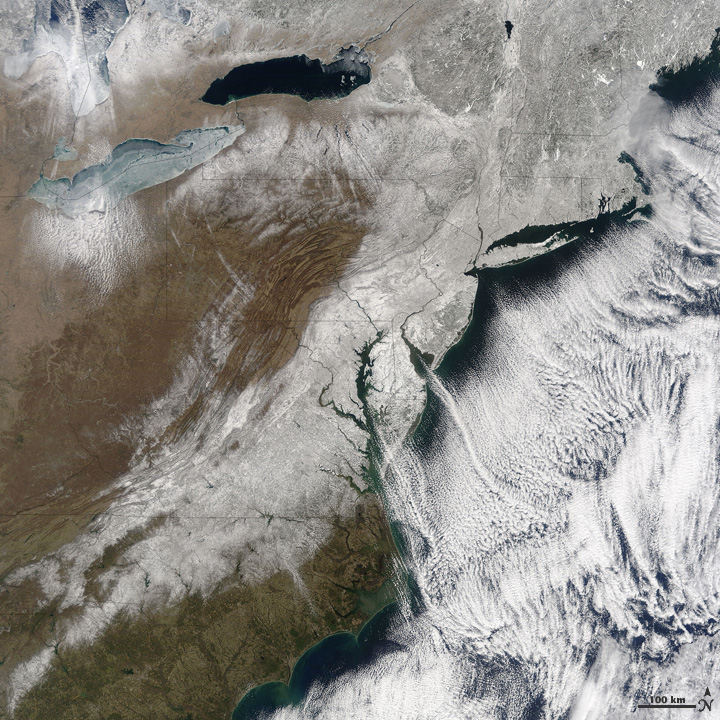 Children were mostly back in school, and trains were mostly running on time by March 3, 2009, when the Moderate Resolution Imaging Spectroradiometer (MODIS) on NASA’s Terra satellite took this picture. The U.S. East Coast was cleaning up after a storm that dumped up to a foot (30 centimeters) of snow on East Coast states from Georgia to Maine.

Skies were almost completely cleared over the East Coast in this true-color image, and a wide swath of snow coated the ground. South of Chesapeake Bay, the snow sweeps inland and stretches southward into Georgia. In the north, Lake Ontario appears ice-free, but some ice coats neighboring Lake Erie. Off the East Coast, clouds form “streets” over the ocean, a pattern seen over the Greenland Sea days earlier.

Bringing a combination of snow, wind, and freezing rain, the early March storm caused some 500 car crashes in New Jersey, led to a 15-mile traffic jam in North Carolina, and sent 50 cars into a Maryland ditch. Heavy, wet snow in Virginia broke tree branches and downed power lines. Airlines grounded flights and home improvement stores sold out their stocks of show shovels and bags of salt. In Philadelphia, however, flower enthusiasts braved the wicked weather to attend the city’s annual (indoor) flower exhibition.