Dust over the Middle East 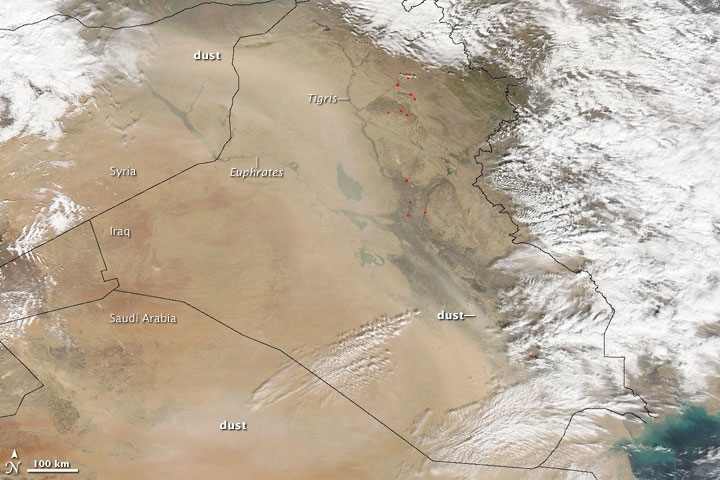 Dust blew through Syria, Iraq, and Saudi Arabia in late February 2009. The Moderate Resolution Imaging Spectroradiometer (MODIS) on NASA’s Terra satellite captured this image of the dust plumes on February 20, 2009.

In this image, a thin veil of dust hangs over most of Iraq. The dust plumes are especially thick over the Syria-Iraq border in the north, the Iraqi river valleys in the southeast, and Saudi Arabia in the south. Source points for the dust are not obvious in this image, but the dust likely arose as a result of wind patterns associated with the clouds over Turkey and western Syria. Fine sediments along the Euphrates River Basin and isolated dry salt lakes along the Syria-Iraq border may have contributed to the airborne dust in the north. Saudi Arabia contains vast sand seas that may have contributed to the dust plumes in the south.

Dust blows in a clockwise direction through Syria, Iraq, and Saudi Arabia in this true-color image acquired June 5, 2009. 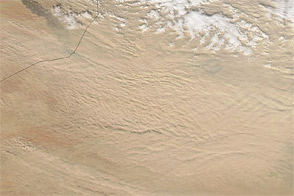 Dust Storm in Syria and Iraq

Acquired in early December 2011, this image shows a dust storm adjacent to a cloudbank in Syria and Iraq.